Where did the banknotes of 10 rubles

The Bank of Russia is not the first year tries to withdraw from circulation ten-dollar bills, replacing them with coins. For the first time about the discontinuation of paper distirubtion was announced in 2009. It was assumed that by 2011 the turnover will be only metallic coins. In fact, it was not so easy, and began to encounter unforeseen difficulties. And even now in circulation across dozens paper. 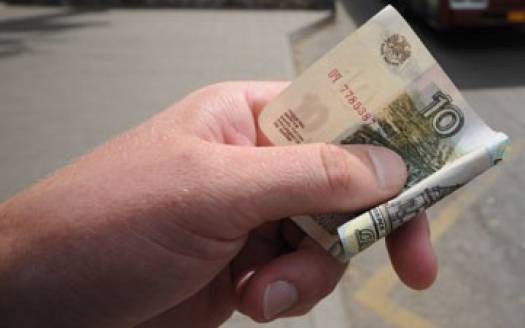 Looking for a response in the Central Bank

Targeted to replace paper banknotes with denomination of 10 rubles the coin is already not the first year.

The whole idea of replacing the ten-ruble banknotes on the iron coin set ourselves one goal - savings. It turns out, according to experts of the Central Bank, in this operation will be able to save about 18 billion rubles for 10 years.

New coin 10 rubles went into circulation on 1 October 2009. It is made of steel plated copper alloy yellow. In size it is closest to the coin of 2 rubles. It is well distinguished from other trivia because of the bright colors.

The production of paper money is much more expensive than minting coins. As a rule, ten-dollar bills wear out quickly old, with wrinkles and creases, they are often not accepted payment terminals. As established in the Central Bank, the average life of a ten-dollar bill is a little less than a year, and coins for about 30 years.

The Central Bank has expressed frustration with the perception of the population of 10-ruble coins. For this reason it will not go ahead with the launch of coins of the larger denominations, although this step was previously scheduled.

It was promised that by the beginning of 2012 paper money in denomination of 10 roubles will be completely withdrawn from circulation. A similar situation happened with the banknote of 5 rubles, which successfully brought out of circulation. But something went wrong. The Central Bank's plans went awry. Was not so easy to immediately take and withdraw all paper gold coins from circulation.

Where can escape of the coins?

There was a rather interesting situation: paper money withdrawn from circulation, and coins are sorely lacking. Just the kind of mystery!

The representative of the Central Bank says that this is more of a psychological reason. In the opinion of the people, metal money is not very convenient to carry, they are heavy.

Because of this, many simply leave their houses in the Bank. This phenomenon acquired a mass character. Babbitt metal does not perceive money as paper notes.

People tend to divided into supporters and opponents of various reforms. In this case it was unanimous. People began to feel uncomfortable. In stores there is an acute shortage of money of this denomination. Payment terminals in Russia is not designed for trivia lovers to recharge your phone on a small amount unhappy, too.

The monument to the lost bill

In 2011 in Krasnoyarsk, which is depicted on a ten-bill, was inaugurated a monument to the ten paper. On the pavement lies a crumpled bill. Residents are proud of the fact that it depicts the Krasnoyarsk hydroelectric power station. Soon now this bill will disappear from circulation forever and become history.
Is the advice useful?
See also
Подписывайтесь на наш канал