How to accustom the cat to the tray

Before you have a kitten or an adult cat, it is better to learn how to care for them. And the first problem you may face is accustom the animal to the toilet. And no matter what age your pet. Accustomed to the tray at any age, especially since you brought him into his new home. 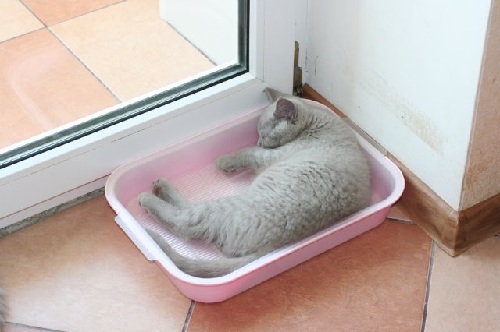 To start, purchase a tray in the special pet store. They come with a grid and without it. Slatted trays are used often, with no fillers, while trays without mesh with high sides is suitable for toilet filling. Usually cats love to dig in the sand after using the toilet, burying his tracks. The filler can also be purchased together with the tray in the store. They vary in quality and prices. Choose what you can afford. Expensive fillers they keep odor and absorb moisture well, they need to change the extent of pollution, and cheaper to change more often. Remember that all fillers need to be thrown in the trash, not the toilet. Filler will be easier to explain to the cat what he needed.

After you bring the cat home, he chooses a secluded place somewhere under the bed or wardrobe. Don't try to get him out of there, so he meets with your apartment and lived in it for people and animals. How will a period of adjustment, he'll come out to you. Tray and put the food near his hiding place. Later you take them where convenient for you.

Introduce your pet to his new toilet. To do this, place the cat in the tray and scrape its paw in the litter. During the games, and after food and sleep allot of the cat to the tray, reminding him that this is his toilet. If the kitten did its business in the wrong place, then carefully assemble a rag or a newspaper of his stool and put it all in the tray. Let the cat smell will appear in the tray.

Don't punish your pet by force, not poke his nose into the puddle, better strictly say "No!". Cats are well versed in the intonation of people. After this punishment, put them in the pan and dig his paw in the litter. When your pet goes in the tray, praise her gentle voice, stroke, can treat with something tasty.

Place puddles in the apartment, it is better to wash with a weak solution of potassium permanganate or vinegar. You can wipe the spot with a piece of lemon. Do not use chemicals with chlorine, they attract cats, not worse than the smell of meat.

Sometimes, adult males may start to mark the corners in the apartment, the shoes of the owner and even his things. Do not think that the way the cat takes revenge on you for something, just don't like the smell of things they celebrate. It could be the smell of another cat on your clothes or unpleasant smell of chemicals, or it was mating period. Banishing a strange smell, the cats leave and calm down. To solve this problem, you can sterilize the animal and wash the place of the mark as described above.

If you took a very small kitten, then you become a mother to him. And that you have to show him where his toilet is and how to use it. Patience, for teaching you'll need at least two to three days.

If you have an adult cat gave birth to kittens, at first she would clean their feces. And further it will show how to use the tray. Kittens learn from the mother and from each other, so that problems should not arise.

If you took a cat from the street, it is better the first time instead of filler to use sand. This is important because outside the house the cat is likely to bury his business in the ground. That you will reduce the time to accustom the cat to the tray.

If you took an adult cat or a cat, ask the owners of the tray. And don't forget to ask what kind of filler was used in the toilet. Cats are very picky, and accustomed to one type of filler, it is very difficult to get accustomed to another.

If you already have one cat and you brought another kitten to teach your baby to be easy. Put their trays nearby, and eventually the kitten will begin to imitate the older cat.

Love your Pets and they will love you back.