In order to move freely by car through the roads of foreign countries, you will need a driving license of international standard. New format for the right to drive the vehicle introduced in Russia in 2011. 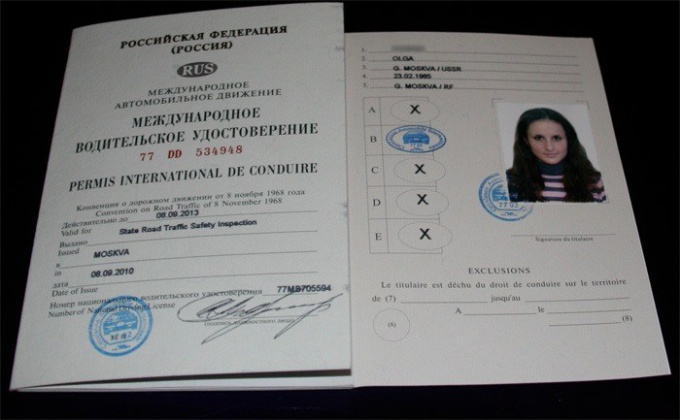 Related articles:
New international law (IDP) are issued in Russia since April 2011. If this time is not expired existing rights of the old sample to redesign them is not required. Get document division of traffic police at the place of residence.

Why do international driving permit?

Under the international Convention on road traffic, which was adopted in Vienna in 1968, to travel by car on the territories of European and many other countries is allowed without an IDP. The Convention was attended by 82 States, including all European countries. Subsequently this agreement was ratified by Mongolia, Kenya, Niger, South Korea, Seychelles. Formally, national law provide an opportunity to drive vehicles in those States, but in practice it is not implemented. For this reason, the tourist inevitably there are complaints from foreign traffic police. For example, in Italy, during the absence of the IDP will issue a fine for $ 300.

In addition, in many European and other countries have established the rule according to which the hire vehicle is only possible on presentation of a driving license of international standard. If you decided to bypass this obstacle and to travel on your own machine, then the visa the Embassy will request the IDP. So it's easier to get the desired ID, moreover, the procedure is simple and does not take much time.

The driver's license of the international sample is a small booklet size A6. It can be completed by hand or printed by using technical means. However, all information shall be entered only in Latin. You can use Arabic font. The front side of the card should contain the following information:

• date of issue;
• start and end date of the action;
• the subject of the Russian Federation, which were given rights and authority involved in their design;
• specify the number and series of the driver has Russian rights;
• need a round seal of the traffic police Department and the signature of the officer issuing IDP;

On the second sheet of books, with its back side, fit information about the limitations (if any) for the management of certain categories of vehicle. The inner side of the third sheet is used to specify information about the driver: name, surname, date and place of birth, where the prescribed or registered. On the same sheet with oval print put the boxes next to the permitted categories of vehicles. For those that are not allowed, in the right places to put the crosses.

When planning a trip to a foreign country should remember that the international driver's license in the countries-participants of the Geneva Convention of 1949 gives the right to drive the car only if the driver makes the police and their national rights. Knowledge of this rule will greatly facilitate movement within most European countries.
Is the advice useful?
Присоединяйтесь к нам
New advices