How to drink moonshine

Moonshine – a homemade strong alcoholic beverage produced in Russia for over half a century. He served in the first tavern near the Kremlin in Moscow, who was allowed to visit only the guardsmen. Today moonshine is not less popular, and his drinking often turns into a national pastime. 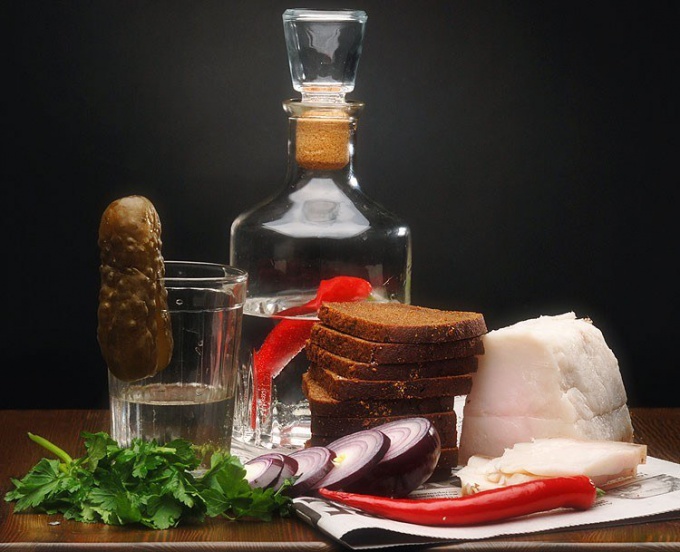 The composition and technology of production of moonshine

For the production of vodka is used the most different raw materials. It is made based on fruit, berries, beets, potatoes, grains or yeast. These components are filled with sugar syrup and undergo fermentation, resulting in alcohol-containing mass, which is called Braga. The past is distilled through a special apparatus and a distillate, i.e., moonshine. The drink is often further purified by passing through the gauze with activated carbon to improve its quality.

There is also industrial production of moonshine, but experts say that its quality can compare with the drink, which is produced by the artisanal masters of their craft.


The types of moonshine

Moonshine is not only a traditional Russian alcoholic drink – it counterparts it is in many countries. Invented in Mexico tequila, for example, is nothing more than a brew made from the SAP of a local agave plant. In Latin America the equivalent of moonshine is a drink called Chichi casera, Germany - Schwarzgebranntes, and in France – Tord-boyaux.

How to drink moonshine

To fully experience the taste of vodka and not to cause harm to the body, his need to drink and to eat appropriate products. So, before consuming this drink is sure to eat, preferably rich and fatty foods – then intoxication will not come quickly, because fat will not give the right to do alcohol in the blood.

To avoid poisoning, do not drink moonshine glasses. The fact that contained in the beverage alcohol have a significant number of adverse components, for example, methanol or fusel oil. They cause lasting and irreversible changes in the human body. If you can not shy away from the consumption of moonshine during the feast, to drink it better in small stacks, making between them breaks big drink and eating fatty food.

The best snacks for moonshine is simple fat and black bread – such a combination is not only beneficial to emphasize the taste of this drink, but also give the strength to hold on until the end of the feast. You can also snack brew hearty salads with mayonnaise, meat dishes and sandwiches that have butter. Very tasty also drinking moonshine with a variety of pickles – sauerkraut, pickles or mushrooms.

But it is best not to use more than 50 grams of vodka at a time, and then only in rare cases. It is believed that this number will easily cope with any colds and at the same time will not cause harm to the body.
Is the advice useful?
See also
Подписывайтесь на наш канал