How to make a Minecraft trap for mobs and griffero

In Minecraft the player and his belongings can attack evil riffery and mobs. To protect yourself, you need to build traps. They are quite simple and complex. To make it easier for all the fans of travelling in a cubic world needs to know how to make a trap in Minecraft. 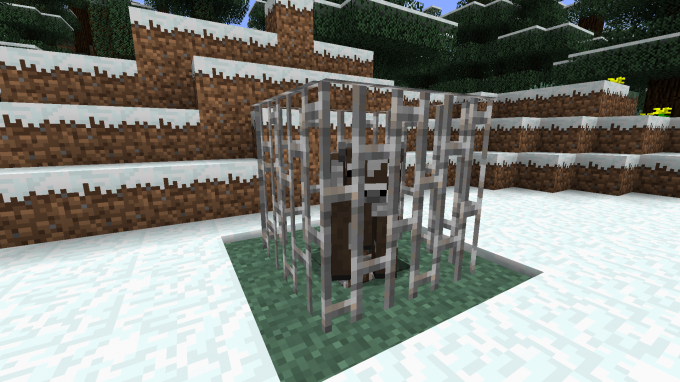 Why you need a trap in Minecraft

Traps differ not only by the materials of construction, but his appointment. Some of them are needed to protect against evil monsters, others to catch griffero.

If the monsters are trying to encroach on the player's life and damage his health, geffery want to destroy the property of micropterus, steal our resources, in every possible way to get players.

How to do different Minecraft traps

To do in Minecraft trap, you need to decide for what purpose you need it. To catch mobs, you can almost any way, but for the cunning griffero need a more sophisticated device.

The most popular means to catch the enemies in Minecraft are mine. Stepping on them, mobs and Griffey explode and do not cause more worry to the player.

To make an ordinary face, you need to dig a pit two blocks deep and put on the bottom stick of dynamite, closing it by any other unit. So the trap worked, it is necessary to cover the pressure plate. When someone treads on a mine, an explosion occurs.

Tricky trap from the water Griffey is mine. Will need a hole filled in one block with water. The top should set the dynamite and the pressure plate. Trap in Minecraft ready.

These types of mines can be built only on the sand. The obvious disadvantage of them is that they are quite visible to other players.

In Minecraft you can also build pit mine. To do this, you should make a pit depth of six blocks with sides four by four. On the bottom of the pit it is necessary to set the dynamite, then fill it with any loose material and install pressure plates. To the bulk material does not fall into a pit during the construction, they need to install another layer of dynamite. Explosives need a top in order to blow the sand or gravel, and the lower - order failed to trap a mob or blown're a known griefer.

As Griffey run very fast and almost does not fall into a very common trap, you can install the pressure plate at some distance from the dynamite.

To make a trap in Minecraft, you need to dig a hole, which will house the wire from the red stone that connects a detonator and explosives.

In addition to mines, in Minecraft you can build, and other traps. A very good option traps can come out of doors and pressure plates. For this you need to have doors around the edges of the plate in the form of a swastika. It is possible to disguise the trap of organizing a corridor of red brick. When this device will hit're a known griefer, he will not be able to get out as the door closes.

For mobs, you can build other interesting trap. You need to dig is similar to the cross a hole depth of two blocks. The centre should place a red stone, and the edges - four piston. On each piston you need to put a fence at red rock - any solid block and the pressure plate. If you make a trap in Minecraft in this way, in contact with the pressure plate, the fence will raise the pistons, and escape will be impossible.