Recipes for soups with chicken broth

Chicken has little fat, so brewed from it, the broth is light and dietary dish. In addition, it is believed that chicken broth has healing properties: it is able to return to the force after a long illness. Based on chicken broth, you can cook different soups. 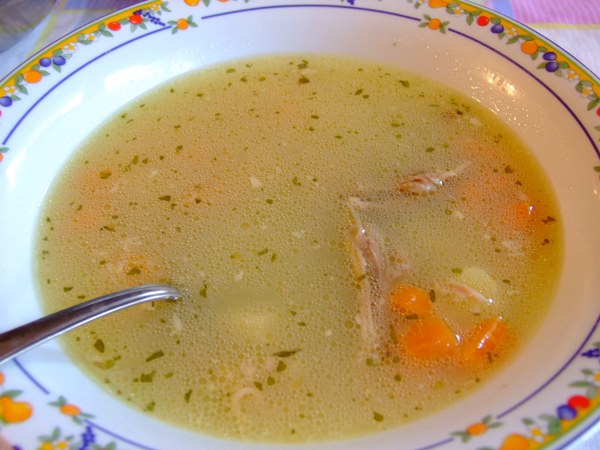 Peel off the skin and bones from chicken, cut into smaller pieces. Peel the carrots and potatoes. Carrot RUB on a large grater, potatoes cut into cubes. Bring to boil chicken broth, add salt to taste, add potatoes and carrots. Cook the vegetables for 10 minutes, then add noodles or rice and leave the soup on the heat for another 10 minutes. At the end of cooking add to the soup chopped fresh herbs, pepper, and grated on a fine grater garlic. Boil the soup for another 2-3 minutes.

Wash and peel the vegetables. Chop the onion cubes, grate the carrots and cut into cubes the potatoes. Finely chop pickles. Saute onions and carrots in a small amount of vegetable oil for 5-7 minutes, then add the pickles and simmer for another 2-3 minutes. Ready zazharku add the tomato paste and stir.

Put the potatoes and washed pearl barley into the boiling broth, cook for 20 minutes on low heat. Add the brine, sauté, add salt to taste. Simmer the soup another 10 min. For a couple of minutes until cooked add to the soup chopped greens.

Peel onions, carrots and potatoes. Of peppers, remove seeds. Cut the onions in cubes, bell pepper strips, potato cubes and carrots RUB on a medium grater. Fry onions, peppers and carrots in a small amount of vegetable oil until tender.

Break the egg and separate the yolk from the white. Put protein in the fridge. Mix the yolk with salt and spoon of oil, add the flour. The resulting mixture, dilute with hot chicken broth until the dough becomes the consistency of a thick cream. Remove from the refrigerator protein and whisk it until frothy. Gradually add the whole beaten egg white into the dough for the dumplings, each time mixing it well. RUB on a fine grater garlic, chop the parsley and add to the dough.

In boiling broth put the potatoes and cook for 15 minutes. Drop in dumpling soup. Do this with the help of two teaspoons soaked in cool water. One spoon shcherbinaite the dough, and scrape another dumpling in broth. Do not make the dumplings too large, as they will increase in volume after cooking. One dumpling is enough to take incomplete teaspoon of dough.

When the dumplings float, add to the soup roasted onion, carrot, bell pepper and salt to taste. Leave the soup to simmer for 3-5 minutes.
Is the advice useful?
Присоединяйтесь к нам
New advices