Why brown-eyed parents have blue-eyed children are born

Hazel eye color in humans is a dominant character in inheritance of genes for light eyes (grey, blue, green) complies with a recessive gene. But this does not mean that brown-eyed parents can not be born a blue-eyed child, because their genome can be recessive genes that met each other. In addition, the genetic inheritance of eye color, and other characteristics, is actually much more complicated process than it seems. 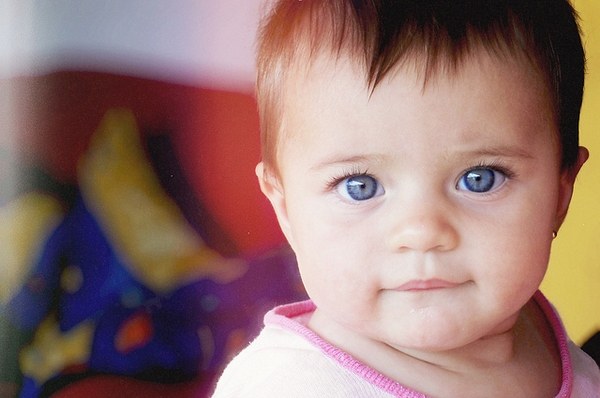 Principles of inheritance of eye color

Eye colour depends on pigmentation of the iris, which contains chromatophores with melanin. If a lot of pigment, the eyes turn out brown or brown, and blue-eyed people disrupted production of melanin. For a bright eye color responsible mutation, which occurred not so long ago – about seven thousand years ago. Gradually it spread, but the mutated gene is recessive, so brown-eyed people are much more on the planet.

In its simplest form, the laws of inheritance can be described thus: in the formation of reproductive cells chromosome set of a human is divided into two halves. The cell takes only one second of the human genome, including single gene responsible for eye color. When two sex cells merge, and the embryo is formed, the genes meet each other in the area responsible for eye color are two of the gene. They will remain in the genome of a new person, but to the degree that external features can only one dominant, which suppresses the effect of other, recessive gene.


If there are two dominant, for example, responsible for brown eye colour, the child's eyes are hazel, if two recessive light.

From brown-eyed parents can be born a blue-eyed child, if both have the genome recessive genes for light shade of eyes. In part of the gametes in this case, it gets dominant, which is manifested in the form of brown eyes, and the other part is a recessive gene. If at conception will occur between cells with the genes for light eyes, child of light eyes.

The probability of this happening is around 25%.

Much rarer situation, when a blue-eyed parent brown-eyed children are born. From the point of view of simplified laws of genetics described above, it is impossible to explain: how could take the dominant gene in the baby, if the parents he had not appeared, so they don't have it? And yet there are such cases, and genetics easily explain it.

In fact, the principles of transmission of characteristics by inheritance is much more complicated than it seems. In humans, eye colour is a responsibility, not one pair of genes, and a set, which mixed the genes inherited from many previous generations. The combination can be very diverse, so you can never predict 100% what eyes will the child. Even scientists still don't fully understand the schemes of inheritance: eye color may affect a variety of genes in different chromosomal regions.
Is the advice useful?
See also
Подписывайтесь на наш канал