Often, the parents when the baby comes, the first thing to stare into his eyes, wondering which of them like a baby. However, immediately after the baby was born, to determine whose it eyes impossible. It is worth noting that the native color of the eyes in children appears much later. 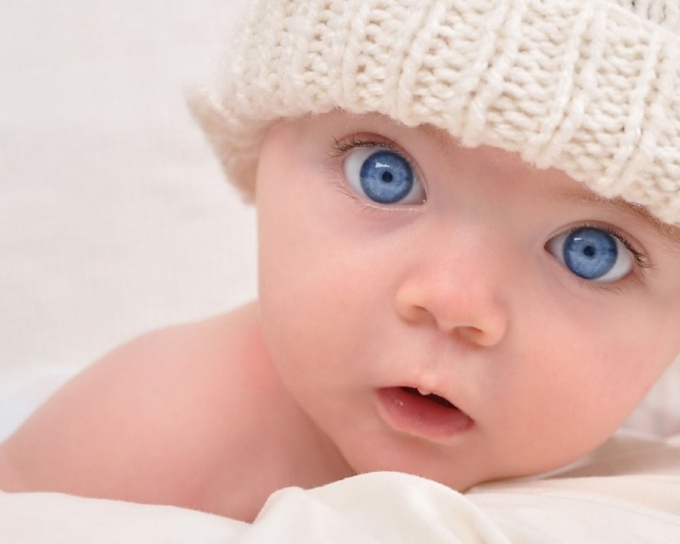 Related articles:
Instruction
1
During the first year of life in children may repeatedly change the color of the eyes, and up to three months in most cases, it is impossible to determine. The baby's visual acuity is very low, approximately at the level of the sensation of colour, but with age it gradually increases and by the year reaches half the level of visual acuity of an adult.
2
In the first days of life a child's vision can be identified by its reaction of the pupil to light. But on the second week he starts to stare at certain objects for a few seconds. The vision appears only in the third month of life, by six months he will be able to clearly distinguish the shapes of relatives, toys, and in a year or even drawings.
3
Skin tone, hair color and eye color is entirely dependent on the presence in the body of the pigment melanin. In most cases in babies in the first months of life the eyes are light blue or light gray color, as in the iris of infants no melanin.
4
With the development of a child's eye color starts to change, it means that his body began to accumulate melanin. If the color of the eyes will darken means of melanin in the body is sufficient when be grey, blue or green pigment is very small.
5
During the development of the child the color of his eyes can change several times. This suggests that the amount of melanin varies in the process of development and growth of the baby. Basically, the eye color completely takes its final color only three or four years of a child's life.
6
The amount of melanin contained in the body can also be due to heredity. The reason for this is the dominance characteristics at the genetic level. A toddler can receive them not only from parents but also from distant relatives.
7
Sometimes children are born with a phenomenon called heterochromia, giving children different colored eyes. There are also children albinos with reddish eyes. If the iris is completely absent melanin, the eye color is determined by the blood contained in the vessels of the iris. Known cases when people with light eyes during illness or extreme stress there is a change in their color.
8
Worldwide has not found any expert who could accurately give an opinion on what color eyes will your baby. Yes, this is probably not the most basic thing in life, because the most important that your child develop healthy and beautiful, and looked at the world kind and cheerful eyes.
Is the advice useful?
See also
Присоединяйтесь к нам
New advices