What to cook with pork

Pork – meat with a sweet, delicate taste. It goes well with sour, salty and even sweet ingredients. Pork carcass can be cooked as a whole or divided into parts. In "business" goes from the snout to hoof. Depending on what cut you make, you should choose the dish you will serve. 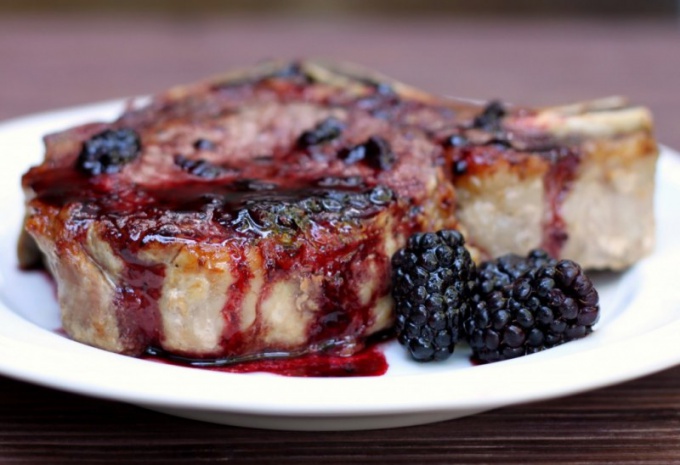 How to cook pork chops

Chops is probably the most popular part of the pig carcasses. They are prepared from the lumbar part of the animal. The larger and medium-sized chops, sold on the bone, represent only a small flesh framed by fat. They make pork chops, beat them and get the scallops, they put different toppings and fold in roulette. If desired, you can saute the chops, pre-fry until Golden brown. Often cook chops on the grill. To chops, cooked in a pan, often served with a sauce obtained by it easier to stir the dish in which roasted meat, wine, balsamic vinegar, Apple cider. In this gravy you can put a little sour cream or butter to enhance the flavor of mustard or herbs.

Pork fillet, like many Housewives. Cooking this cut requires minimal effort, though it's a bit to overdo it, the meat becomes juicy and soft, but dry and hard. To avoid this, fillet before heat treatment is marinated using various types of acid – lemon juice, wine, flavored vinegars. Another way to save juice is to seal the fillet, that is, pre-fry it in a hot pan on all sides until Golden brown. Thus prepared meat baked in the oven entirely. You can also slice the fillet into small slices – these are called medallions and fry them as small chops, within a few minutes.

What to cook from a leg

Ham – impressive part of the carcass. It is prepared with ham, casaliva, otvarivaya and bloating over fragrant wood chips. It can be baked whole, pre-pickling, and then spigot pieces such aromatic vegetables like carrots or garlic. Handsome baked ham is a common ornament of a celebratory table.

What to make with pork belly

Pork belly is one of the most inexpensive parts of the carcass. Chopped into pieces put it in a stew, cook it from the broth, which are particularly suitable for cabbage or soups from legumes. Stew on a slow fire, the breast turns out flavorful and lean, because during this time, you can melt all the fat. Bacon –the ingredient of many delicious dishes. The Italians cook pork belly delicious dish – porchetta for him they thickly strew the cut chopped herbs, rolled into a tight roll, tie with string and leave overnight in a warm oven.

How to prepare blade

Meat from the shoulder part of the carcass contains as much fat as necessary for good meat. It is from ground blades also serves a range of burgers, meatballs, organic sausages and terrines, pie fillings. Cut that meat into pieces, you can put it in stews, casseroles, and various dishes of Asian and Mexican cuisine. Bake the shovel and as a whole, generously pre-lubricated with oil, salt and pepper.

Dishes from other parts of the carcass

Biggest demand is for pork ribs. They are boiled, then pickled, and then roasted on the grill. Sometimes the ribs are fried in a pan or stew, chop into pieces, with various vegetables. Delicious, but the bold part is the neck. This is the perfect meat for barbecue. Pork legs obtained from the nourishing jelly. Especially tasty and roasted pig's head, but this dish is not each owner.
Is the advice useful?
Присоединяйтесь к нам
New advices