Types of philosophy and their characteristics

Philosophers of different epochs have not considered the world as a whole, and ideological problem through the prism of relations between the world and man. Philosophy is a constant dispute between materialism and idealism, agnosticism and epistemological optimism, metaphysics and dialectics of nominalism and realism. For understanding of philosophy and its cognition as a science is very important to solve the issue of periodization and classification of its types. 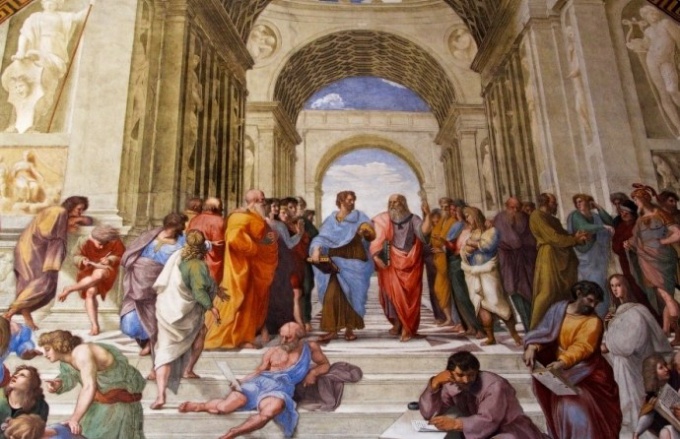 The philosophy of Ancient China and Ancient India

The problems of Oriental philosophy, established a brutal caste division and inequality, the influence of the zoomorphic mythology. Due to totemism and ancestor-worship this type of philosophy is insufficiently rationalized. In the philosophy of Ancient India, decided to allocate the following schools: Orthodox (yoga, Vedanta, Mimamsa, Sankhya) and unorthodox (charvaka-lokayata, Buddhist, Jain). Most of them clearly defined the concept of karma – the law, which entirely depends on the fate of each person. Another fundamental concept was "samsara" - the chain of incarnations of living beings in the world. The output of this circuit is Moksha, but the definition of the various principles and distinguished philosophical schools of Ancient India.

Ancient philosophy, developed in Ancient Greece and in Ancient Rome, was in its development stages. The first stage is the origin of philosophy. It involves the appearance of a Milesian school, which belonged to Anaksimen, Thales, Anaximander and their students. The second stage is connected with researches of such philosophers as Aristotle, Plato, Socrates. During the heyday of ancient philosophy, there was the formation of the school of the sophists, atomictom, pythagoreiou. The third phase is not Greek and Roman. It includes such currents as skepticism, stoicism, Epicureanism, the.

The philosophers of antiquity observed the phenomena of nature, trying to explain. The "heart" of the teachings of ancient philosophy can be called cosmocentrism. Man is the microcosm that exists within the macrocosm of nature and the elements. The philosophy of this period is characterized by a unique combination of natural-scientific observation with aesthetic and mythological consciousness. Ancient philosophy is dozens of philosophical ideas, which were often directly opposed to each other. However, and this determined all later types of philosophy.

In the era of feudalism, which include medieval philosophy, all human life was subordinated to the interests of the Church and strictly controlled by it. Religious dogmas zealously defended. The main idea of this type of philosophy is the monotheism of God. Disasters, or the macrocosm are the main force ruling the world, but only God the Creator of all things. The basis of medieval philosophy lay a few principles:
- creationism (creation by God of the world of emptiness);
- providentialism (history pre-conceived God's plan for the salvation of man);
- symbolism (the ability to see hidden value in the mundane);
- realism (God is in everything: things, words, thoughts).

Medieval philosophy is usually divided into Patristics and scholasticism.

The philosophy of the Renaissance

During the birth of capitalist relations in Western Europe (15-16 centuries) began to develop the philosophy of the new type. Now, in the center of the universe is not God, but man (anthropocentrism). God is perceived as the Creator, the person from it formally depends, but the man practically equal with God, for it is capable to think and create. The world is seen through the prism of subjective perception of his personality. In the period of the philosophy of the Renaissance first appear humanistic-pantheistic worldview, and later naturalistic-deistic. Representatives of the philosophy of this type is N. Cusa, Giordano Bruno). Bruno, George. Pico Della Mirandola, Leonardo da Vinci, N. Copernicus.

The philosophy of the New time

The development of mathematics and mechanics as Sciences, the crisis of feudalism, the bourgeois revolution, the rise of capitalism – all this has become prerequisites for the emergence of a new type of philosophy which was later called the philosophy of the New time. It is based on an experimental study of Genesis and its interpretation. The mind was recognized as the highest authority, which is subordinated to everything else. Philosophers of New time was conceived of the rational and the sensuous form of cognition, which determined the emergence of two main trends: rationalism and empiricism. Representatives of modern philosophy are bacon, Descartes, Leibnitz, D. Diderot, J. Berkeley, T. Hobbes, and others.

Social transformations of the late eighteenth century that occurred in Germany and the French revolution became the prerequisites for the emergence of a new type of philosophy, the founder of which is considered to be Immanuel Kant. He explored the questions of natural science. What Kant belong to the hypothesis that due to the tides slowing the rotation of the Earth and that the Solar system arose from gaseous nebulae. Somewhat later, Kant turns to the problem of the cognitive capabilities of a human, developing his theory of knowledge in the key of agnosticism and of the a priori. According to Kant, nature has no "mind", and is a set of beliefs about her. What man has created, knowable (in contrast to the chaotic and illogical world of phenomena). The epistemological concept of Kant has 3 stages of knowledge: perceptual knowledge, the arena of reason and the region of the mind governing the activities of the mind. Ideas Kant developed Fichte, F. Schelling. To the German classical philosophy attributed to G. Hegel, L. Feuerbach, and others.

The philosophy of modern times

This type of philosophy developed in the nineteenth century. The basic idea was that human knowledge is boundless and it is the key to realising the ideals of humanism. Central to the philosophy the cult of reason. Basic principles of classical philosophy have been reinterpreted Nietzsche, Kierkegaard, Schopenhauer. Their theories called neo-classical philosophy. Scientists Baden school suggested that there are historical science and natural science. The first is the science of events, the second of the science of laws. Real they recognize only individual knowledge, considering any other abstraction.
An important part of the philosophy of modern times are the works of Karl Marx. Among other things he formulated the concept of alienation and the principle of revolutionary elimination of alienation, of creating a Communist society, where anyone can freely work. Marx is convinced that the basis of cognition is practice, which leads to the materialist understanding of history.

Russian philosophy has always been distinctive, as well as all the cultural and historical development of Russia. She was born a little later than in Europe, and originally professed the ideas of the ancient and Byzantine thought, and then felt the impact of Western trends. Russian philosophy is closely connected with religion, art and social and political activities. She focused not on the epistemological issues, and we'll get (knowledge through intuitive knowledge). Of particular importance in the Russian philosophy is paid to the human being (anthropocentrism). It historiosophical type of philosophy, since man can not live and think outside of socio-historical issues. Great attention in the Russian philosophy directed towards the internal world of man. Representatives of Russian philosophy can be considered the City of Nyssa, I. Damaskin, K. Turovsky, N. Sora, Philotheus, V. Tatischev, M. Lomonosov, G. Pan, A. Radishchev, P. Chaadaev, A. Khomyakov, A. Herzen, N. Chernyshevsky, F. Dostoevsky, L. Tolstoy, V. Solovyov, V. Vernadsky, N. Berdyaev, Vladimir Lenin and others.

The philosophy of the last quarter of the twentieth century

In the last quarter of the last century philosophers around the world turned to the search for a new rationality. There are three turn of philosophy: the historical, linguistic and sociological. Within theological traditions are manifested modernist tendencies. Parallel to this, there is a process of reflexive processing of products of myth-making. Philosophers "cleanse Marxism from utopianism and direct political interpretations. The philosophy of the last quarter of the twentieth century is open and tolerant, there is no of the dominant schools and movements as ideological boundaries between them are erased. Part of the philosophy is integrated with the Humanities and the natural Sciences. Representatives of the philosophy of the last quarter of the twentieth century are G. Gadamer, P. Ricoeur, Levi-Strauss, M. Foucault, J. Lacan, J. Derrig, R. Rorty.
Is the advice useful?
Присоединяйтесь к нам
New advices