Before the owner of every cat in his time raises the question of whether to castrate him your pet or not. Many owners – often, men think that castration is something terribly painful and just sadistic. In fact, any veterinarian carries out daily dozens of such operations. If castration of a cat is performed in veterinary hospitals, it is a simple operation, which will greatly facilitate the further life of the owner and the cat under one roof. 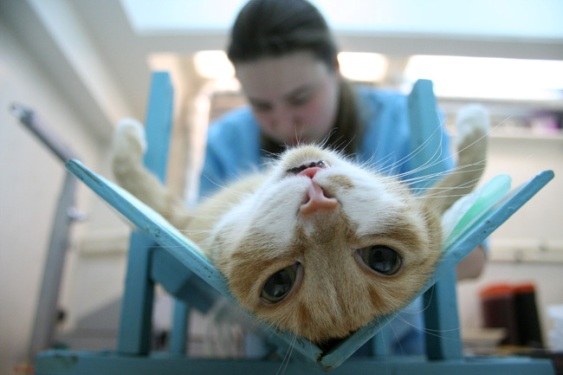 Related articles:
Cats are perfect Pets; this is sure a lot of people. At first it's funny and touching the kitten, and then clumsy playful cat-a teenager who after some time turns into a solid and luxurious cat. Unfortunately, the unbearable smell of cat labels and the incessant cries of a cat in the period of sexual hunting can negate all the joy from the fact that your house has such a wonderful pet.

Indeed, since 7-9 months cats during rutting behavior is just disgusting. This is complicated by the fact that, unlike cats, in cats the period of sexual hunting can be almost year-round.

Cat feels the presence of another adult male, which can live even on a different floor or even in another apartment building entrance, and sees it as a rival. In the quest to kill the smell of cat competitor may rearrange the members literally everything what dotyanet, secret special internal glands. Cat tags have a sharp unpleasant smell, from which it is almost impossible to get rid of.

There are two options to prevent the appearance of odor in the house. The first is to provide your cat the opportunity to have periodic contact with a cat. Breeders of purebreds do, but why to produce purebred kittens, who often become homeless? Therefore, for those who are not planning to knit your cat, neutering is ideal.

How is neutering a cat?

Neutering a cat is a simple surgical procedure that is performed under General anesthesia. In order to avoid vomiting and other complications on the day of castration, the cat should not be fed. Being under anesthesia cat shaved the hair from the scrotum, then it is two small holes. Through them, the veterinarian removes the testes and bandaging the spermatic cord. The whole operation takes no more than 3-5 minutes.

Cat heat wrapped in a blanket and driven home. Do not place it on a sofa or armchair – departing from the anesthesia, he can fall and hurt yourself. Don't let the cat lick the wound, because it can scratch it with his rough tongue. After a few days consciousness of the cat is finally clarified and he will be as fit and healthy as before castration.

Neutered cats need to eat so not to provoke the development of urolithiasis. In addition, after castration, some cats become prone to weight gain, so the owner does not overfeed the animal.
Is the advice useful?
See also
Подписывайтесь на наш канал