When celebrate day of the Neptune

It is very difficult to enter a new holiday or cancel an existing one. The holidays appear when people have they need. The Day of Neptune reigns the universal joy and exultation. This holiday is really loved by both adults and children. The program prepares its holding each year carefully in advance. 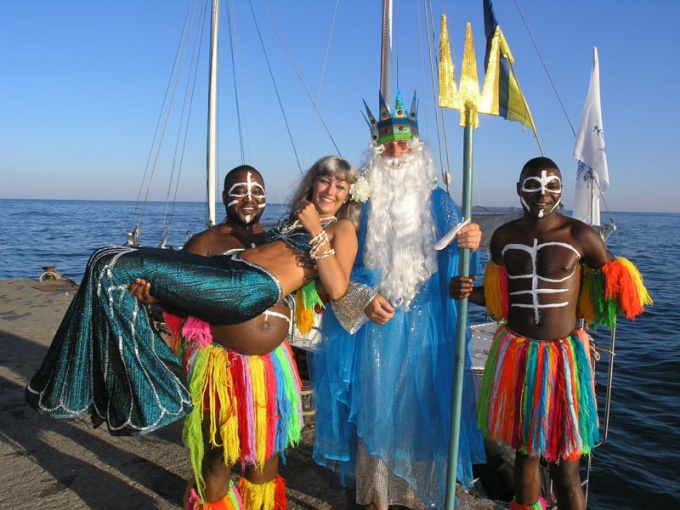 How to celebrate the Day of Neptune

Happy holiday Neptune Day coincides with the Day of the Navy. Celebrate it on the last Sunday of July. Usually the Day of Neptune's weather is hot, so this holiday, with its traditional pouring water, throwing friends under the cheerful laughter of others in the water, became very loved and popular.

The Day of Neptune can be sporting events, carnivals and pirate, and foam parties, discos, and fun contests. Importantly, all of it was fun, and next was the water.

In the army, in rest houses and sanatoria located by the water on such a day people have fun and swim. On holiday necessarily the God of the seas Neptune with a white beard, fins, with a Trident in his hand and surrounded by the retinue. Neptune is always accompanied by painted mermaids, water spirits and devils. Just appeared, they immediately try to grab someone from the crowd and dragged into the water.

The tradition to celebrate this holiday has its roots far back in history. In Ancient Rome, on 23 July, celebrated sea-king, patron of the seas and oceans - the terrible and the mighty Neptune. In mythology he is not only Lord of the oceans and seas, but also the patron of horse races and horse breeding. In honor of this God in Rome erected the temple, where the annual celebration conducted under the name Neptunalia.

In Russia the holiday was first held on boats under the command of I. F. Kruzenshtern and Y. F. Lisyansky in 1803, during the circumnavigation. This holiday was created to add variety to a rather monotonous life of sailors during long sea passages from one port to another.

Neptune day is celebrated on ships at the moment of crossing the equator. The ship's captain asks the sea God to allow the team to sail the Northern and southern water areas. The rite of baptism undergo the sailors, who for the first time crossing the equator. Doused with water and thrown overboard. Held relay races on the water, water fight two or more teams. Funny jokes and competitions continued throughout the day.

When we celebrate the Day of Neptune, singing and dancing mermaids, devils, fish, so this holiday is pagan. Recently, a proposal does not mention it and substitute any other. We do not know whether to make this change. Some holidays, including this one, remain very popular and beloved among the people, and to abolish them is not so easy. And whether you want..?
Is the advice useful?
Подписывайтесь на наш канал