Rhubarb jam: what useful properties it has

Rhubarb is a perennial plant of the family Polygonaceae with fleshy roots and large leaves on thick petioles reddish color. It is eaten both in raw and cooked state. From petioles of rhubarb obtained useful juice, jelly, filling for pies and jam. 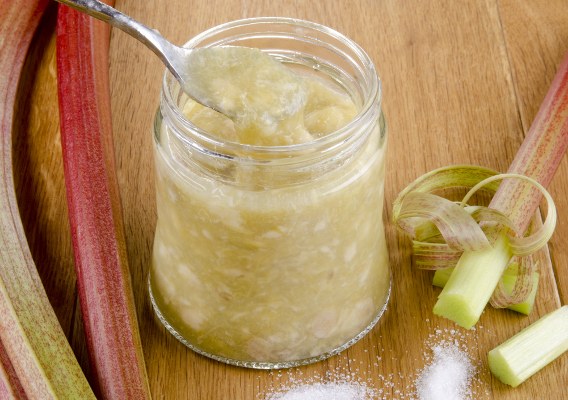 What are the benefits of rhubarb jam

In the food used only the stalks of rhubarb. They are malic, citric, oxalic, succinic and other organic acids. The rhubarb also contains pectin, mineral salts of magnesium, phosphorus, calcium, tannin. It is rich in vitamin E, A, C, b and carotene. 100 grams of fresh rhubarb stalks contains one-third daily value of the very rare vitamin K, which provides the body vitality and longevity.

After harvesting rhubarb the leaves should be cut because they are toxic due to high content of oxalic acid.

Has useful properties not only for fresh rhubarb, but meals out of it, in particular, jam. The taste is even more extravagant than the dandelion or rose.

How to cook rhubarb jam and strawberries

Wash the rhubarb stalks in running water. Drain them and remove streaks. It is advisable to use stalks that are easy to burst under pressure.

Cut the rhubarb into small pieces and place in a bowl in layers alternating with sugar. To do this, use only half the sugar. Cover the bowl with a cloth and leave for a day. During this time, the rhubarb should give juice. Carry out a similar procedure, and strawberries.

Put the rhubarb on a low heat and cook it to a state of transparency. Then add the strawberries, stir and simmer, stirring occasionally.

The period of collection of rhubarb occurs in June-August, but jam it is best to cook until the middle of June – then the stalks will sagraut and accumulate a lot of oxalic acid.

Rinse the rhubarb stalks and cut them to pieces.

Cook sugar syrup. To do this, pour into a bowl of water, add sugar and put on fire. Cook this mixture until boiling. Add to the syrup washed cherry leaves, and remove from thence, when the sugar is completely dissolved.

Pour the chopped rhubarb in boiling syrup, bring to a boil, and then simmer until cooked. The stalks of rhubarb should become transparent and the syrup thick. If you want, jam you can add cinnamon or vanilla sugar. They will significantly improve its palatability.

Pour the jam on sterile banks and close the lids.
Is the advice useful?
Подписывайтесь на наш канал