How to overcome the fear of the fight

Sometimes there are situations when a person is forced to forget about civilization and to protect yourself or your loved ones to unleash the primitive instincts of survival. Of course, many problems can be solved peacefully, but sometimes fighting is necessary. However, many people lose the fight even before the start, because they are afraid to fight. How to overcome fear before fight? 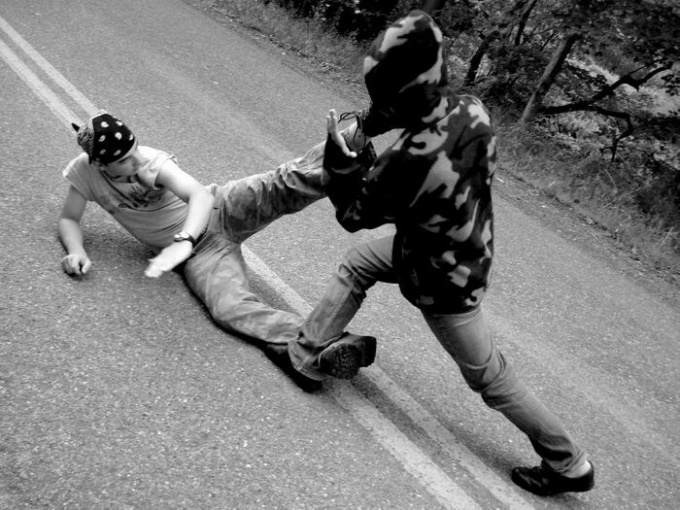 Why scared to fight

In cases where without a fight can not do, many people are not used to cause or experience pain, encompasses a stupor, which automatically leads to defeat, even if the opponent is obviously weaker. This panic may look different and not always directly linked to the fear of pain or fear for their lives. Sometimes it can take the form of emotional stress or fear of the law, but the basis is always a psychological unwillingness to join the fray.

Most often the fear of the fight connected with lack of necessary experience of physical conflicts generated by modern education. From an early age man is taught that fighting is bad, so in situations where no physical contact can not do, many have to overcome a difficult mental barrier, while the aggressor, as a rule, entirely devoid of feelings about the coming conflict, which allows him to win. The willingness to fight is one of the most important things, giving you the opportunity to get out of a dangerous situation, and in many cases one demonstration of this commitment is enough to extinguish the conflict.

Even the most formidable weapon of self-defense will not be able to protect you if you are ready to use it. On the other hand, people tuned into the fight, can win without weapons.

How to overcome fear

There are several ways to overcome the panic and fear of the fight, but you should consider that in this case there are no simple solutions, and to stop being afraid to join the fray, will have to work hard, especially if you have experience a little bit.

The most familiar version to cultivate fighting spirit – to enroll in self-defense or martial arts. In addition to combat skills and strengthening of physical preparation these sessions is likely to save you from the fear of physical conflict. Unfortunately, to achieve any significant results will take a long time and planned to do one or two classes will not drastically change your emotional or mounted combat skills. Usually it takes years of training.

If the fear of the fight are unknown to you, you should not try to resolve any conflict by force. Fight only in those cases when there is no other way.

For those who can't afford to spend so much time on overcoming the fear of the fight, can come psychological way of managing emotions. Its essence boils down to the fact that one intense experience can turn into more, if you know the technique. For example, the transformation of fear into anger: in a dangerous situation adrenaline voltage requires output, but if you send him in the right direction, instead of chilling horror you will experience fighting the anger that will allow you to fight and win. The ability of a person to control their own emotions very high, and to ignore them is not worth it.
Is the advice useful?
See also
Присоединяйтесь к нам
New advices