Why do people discuss other for the eyes

There are people who like to gossip and discuss other people behind them. Rumor-mongering and blooming rumors in the absence of the object under discussion gives them a special pleasure, but what makes them do these unsightly things? The reasons for this are several. 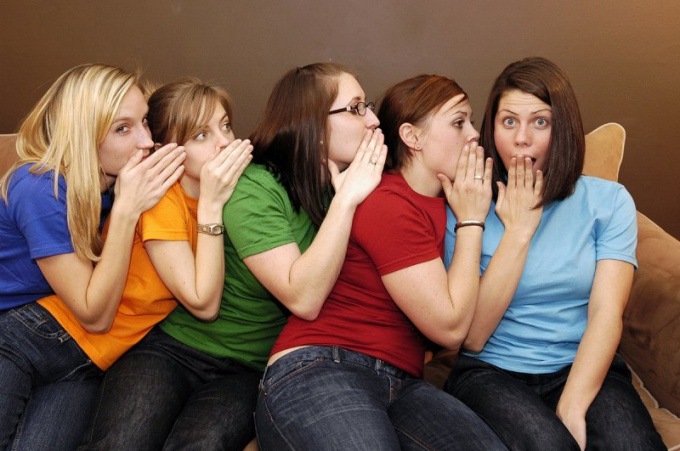 What triggers the discussion?

First and foremost, the discussion of the person behind him allows the gossip to feel more significant and authoritative in the eyes of the audience. This is also due to the usual envy, the desire to achieve the status of the discussed person and sublimation of their desires towards him. Gossip about someone often raise self-esteem of the gossiper and give him the opportunity to grow in their eyes and also to acquire ephemeral power over the reputation discuss.

Often with the help of gossip people justify their shortcomings – because in the other they just irritate those qualities which they do not find (or recognize) in ourselves.

Not the last reason for the discussion is the desire to please the other party. Sharing with someone a kind of secret, gossip automatically becomes a person in possession of important information that he decided to trust the source, highlighting it the most. The more rumors are spreading gossip, the more confident they feel in supporting their own self-centeredness and often getting the appreciation for the awareness in the personal Affairs of certain persons.

The birth of gossip

Everyone has their point of view, but not everyone wants to Express it. Discussion back often err women cocky and conceited people who believe it necessary to convey to others his Regal mind. Gossip often play the role of a social "glue", because it could help people who can't always find a common topic of conversation, realize their need for communication. Discussing someone, they often find like-minded people and continue to speak evil in your close circle.

Usually are discussing a person sooner or later finds out about the gossip spread around her - and then the gossip may suffer for his long tongue.

Psychologists recommend the objects of discussion to ignore the distributed gossip about them or to contact with all the gossip, demanding confirmation of his accusations or false facts. Active refutation or response gossip reduces man to a loser, so all negativity must be taken with a sense of humor and reply to all Regal condescending smile. It usually hate gossip more than anything – after all, the original goal is not met, the object does not suffer, therefore, the gossip turns into a powerless market-woman who looks like a Pug that barks at the elephant.
Is the advice useful?
Присоединяйтесь к нам
New advices