What does the Crescent on the crosses of churches

The hallmark of any developed religion researchers believe her characters. For Christianity is the cross, for Islam is a Crescent with a star inside. But there are some characters that make you think about probably lost the unity of the confessions, the old Christian cross pores Nikon with a Crescent at the base. 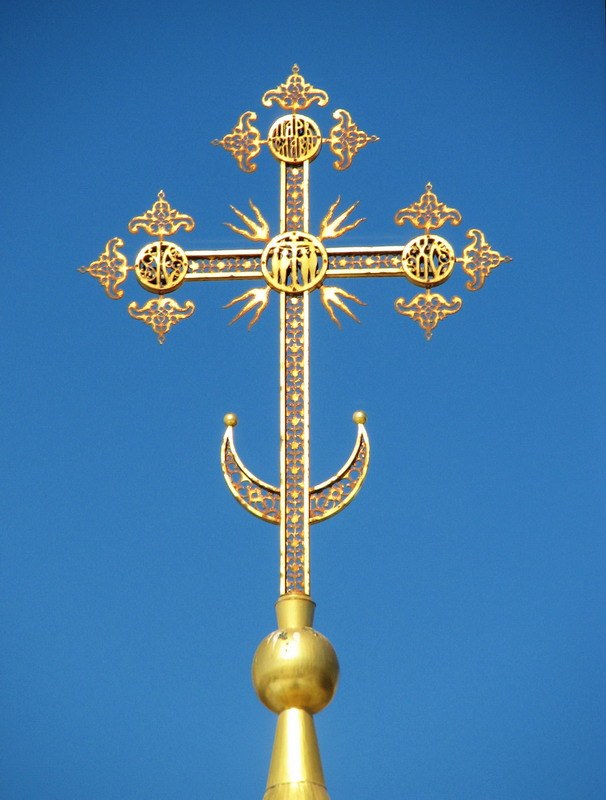 Related articles:
Denominations use a variety of forms of crosses. So, the cross of the old believers has a rounded shape, a Catholic strictly geometric and has four beams, the cross in Orthodoxy – eight, comprising two parallel horizontal arms and a third lower oblique, which probably refers to the footrest. This cross is considered to be closest to that on which Jesus was crucified. Another common form of a cross, which can be found on the domes of Christian temples, it is a cross with a Crescent.

The most ancient Orthodox crosses had the dome, which resembled the roof of the house. They still can be seen in the old cemeteries, where there is a custom "cover" the memorial cross.

The unity of the faith

There are versions that the Crescent moon shows the relation between Christianity and Islam or between Christianity and paganism, because this character existed both in that, and in another religion. Also takes place to be the version that the cross with the Crescent, indicate that there was a time when Islam and Christianity were a single religion. And the shape of a cross with a Crescent symbolizes this era. The modern separation of the two religions – Christian and Muslim, this symbol makes you regret the fact that Edinoverie was lost.

The triumph of Christianity

However, many scholars believe that the Crescent (tsata) on the cross has nothing to do with the Muslim character. And in fact it's hands, folded together to maintain the Orthodox symbol of faith.

In some texts of the middle Ages says that the tsata is the manger of Bethlehem, took in his arms the infant Jesus, and also that it is the Cup of the Eucharist, which took the body of Jesus.

There is a version that is a symbol of the cosmos, which highlights the presence of Christianity in the world and has nothing to do with Islam.

Proponents of semiotics believe that the Crescent is not actually a Crescent moon, a boat, and the cross is the sail. And this ship with a sail to symbolize the Church, which sails to salvation. About the same content of the explanation in the book of revelation.

The philosophy of the East the symbol of Christianity

Very interesting version, which says that the image of the Crescent indicates that Jesus was in the East. It turns out that there are indirect indications that Jesus really was in the East in the period of life between 12 and 30 years (this period of his life that is unknown to scientists, ie, where Jesus lived, what he did). In particular he has been in Tibet, which proves the similarity of his words with ancient Eastern philosophy of the time.

Historians differently to the cross with tsata, arguing that the Crescent was the official sign of the state of the Byzantine Empire, conquered in 1453 by the Turks, who borrowed the tsata, making it a sign of the great Ottoman Empire. It is known that the planting of Islam in Byzantium was not, but to the Orthodox cross on the dome of the temple in the 15th century was added the Ottoman this is a sign of power. Kind of a sign of reconciliation and unity between the two cultures, and religions.
Is the advice useful?
See also
Присоединяйтесь к нам
New advices