How to fertilize with nitrate

Ammonium nitrate is a fertilizer that allows you to compensate for the deficiency of nitrogen in the soil. Nitrate should be used with caution only on podzolic soils, as it can increase their acidity. In alkaline and neutral areas its application is limited only by the characteristics of crops. 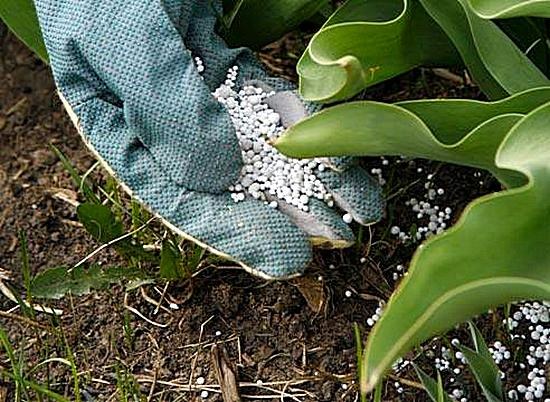 Related articles:
You will need
Instruction
1
Ammonium nitrate is the most inexpensive industrial fertilizer. It can be used all year round. Some gardeners scatter nitrate at the site directly on the snow. One of the features of this fertilizer is that it is able to work even in cold soil. In the spring, as soon as will thaw a thin top layer of soil, you can scatter the nitrate phase, slightly close up it with a rake. Using this method, you will prevent the starvation of spring nitrogen in perennial plants.
2
Many farmers prefer nitrate to other nitrogen sources, however, it should be remembered that nitrate is not suitable for foliar feeding. Never spray the plants with nitrate, otherwise instead of feed, you'll burn them. Nitrate can be found in the soil, not only with a rake. Optimal effect is achieved when applying this fertilizer to a depth of about ten inches, this will allow the maximum amount of nitrogen to remain in the soil.
3
Well, if you use a nitrate fertilizer when watering their plants. Nitrogen compounds perfectly soluble in water, this method is very convenient, since you don't have to dig or loosen the earth. In addition, these glazes contribute to a more uniform distribution of nitrogen, bringing it into deeper soil layers.
4
In late summer and autumn use nitrate need more caution. Excessive nitrogenous well-being can make the plant to increase the green mass, instead of giving a good harvest, especially the tomato plants and cucumbers. You may get a huge shrub with small, undeveloped fruits. In order to avoid such effects, about mid-July, begin to reduce the intensity of the dressing using ammonium nitrate.
5
Many people know that a glut of soil nitrogen contributes to the accumulation of nitrates. This is another reason that should not be abused ammonium nitrate in late summer. Just before harvest, about 10-20 days, stop feeding. To efficiently use the nitrate more active in the spring and early summer, it will allow the plants to get stronger and to gain strength.
Note
A particularly good nitrogen fertilizing in the period of sowing seeds and growing seedlings.
Useful advice
If you are fond of cultivation of flower crops on your plot, you don't have to worry about the overabundance of nitrogen, the flowers usually respond to nitrate only lush blooms.
Is the advice useful?
See also
Подписывайтесь на наш канал