Increased fire safety requirements that apply to buildings and structures of public and social purpose, is justified and has helped to save lives. The owners of private houses also establish a special system of warning of smoke. But the greatest degree of protection can provide sprinkler and deluge extinguishing systems. 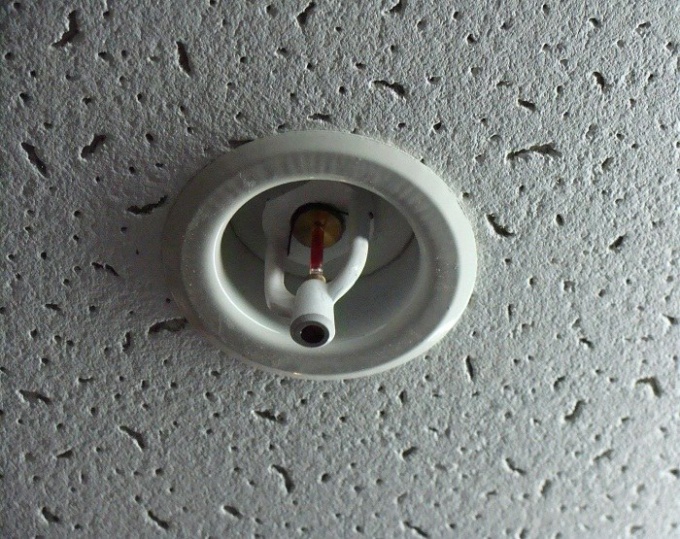 The principle of operation of sprinkler system

The main element of this system is the sprinkler – spraying device that uses water under high pressure. It is mounted in the piping system and typically is located on the ceiling in those areas that need to be protected from fire hazard. Controlled and the system is controlled by numerous sensors that react like the sign of smoke, and on an abnormal rise in temperature.

In case of danger of fire signals it receives from sensors to the control unit, which actuates the sprinkler. But, the locking element can only be destroyed under high temperature. In standby mode, the inlet of the sprinkler of the sprinkler is closed with a special valve constipation. These gates can be destroyed not everywhere, but only in those plants that were exposed to high temperature, which allows to apply the system to extinguish local fires, not filling water to those premises where the temperature is normal. At first glance this is very convenient, but in some conditions the speed of operation of the sprinkler may be substantially different from the speed of fire spread, which is one of the most significant drawbacks of such a system.

The efficiency of a sprinkler system is comparable to the adhesives.

The disadvantage of sprinkler systems

The advantages of sprinkler systems are the following: low cost of equipment, installation and operation. But her work there is criticism concerning the inertia trigger. When low ceilings (up to 5-7 m), and a significant initial increase in temperature, the sprinklers work quickly. However, in rooms with high ceilings and fire the first stage of which is a low grade smoldering, which is characterized by a slight evolution of heat, the sprinklers just don't work out in time, allowing the development process to a significant increase in temperature, accompanied by significant destruction.

Today the market of fire safety systems there are other devices, using deluge method, in which the fire extinguishing mixture is sprayed in a large area, certainly greater than the area of the outbreak of fire. As a result, systems operating on this principle, has fast response and high efficiency, ensuring the elimination of fire danger in the Bud. But the disadvantages of the deluge systems is the fact that the damage from their work, sometimes comparable to the damage caused by fire.

In building codes, regulations and design rules fire extinguishing systems, does not set specific technical requirements for the design and principle of operation of such units. Therefore, some manufacturers of sprinkler systems fire safety work to reduce their thermal inertia, while others are trying to find a compromise solution between the sprinkler and deluge extinguishing systems, combining the advantages of each of them.

To reduce the price and ease of installation in modern sprinkler systems use plastic pipe and to increase efficiency – managed system fire, which implements the optimal algorithms based on the analysis of the nature of fire and its development. The work of such systems is still based on the use of sprinkler irrigation systems, but with the possibility of mandatory start-up.

To increase the efficiency in modern fire sprinkler systems be useful to have the possibility of removing the shut-off valve with rollover forced the start to the moment when it is needed.

The initiating device to a managed start can have different constructive and technical realization, but its primary purpose is to provide local heating of the shut-off valve to activate sprinklers irrigation system. Among the technical solutions which have already found their embodiment in sprinkler systems of new generation can be called the electric contact elements: the filament and the resistors, gas generators and photostrictive with high heat dissipation.

On the market the newest firefighting systems, high reliability and efficiency, which can be installed not only in public places and industrial buildings, but also in apartments or private homes, presents the development of both domestic and foreign companies. In the proposed sprinkler system-managed start-up uses electroresistive or gas-generating device playing the role of initiators of the operation of the sprinkler.
Is the advice useful?
See also
Присоединяйтесь к нам
New advices