How to cook cheesecake

At the mention of the American lifestyle in mind looming just a few items, or rather products. First, it is the famous Malboro cigarettes consumed by young people drink Coca-Cola, hamburgers from McDonald's and, of course, iconic American pie cheesecake. 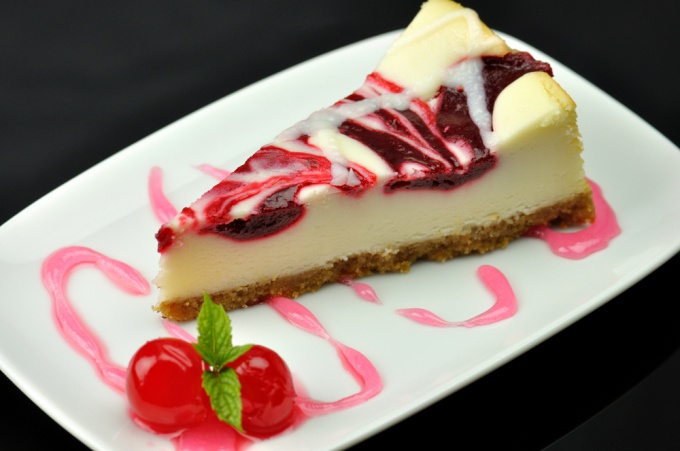 Today, it's a great and easy-to-cook dish enjoys unprecedented popularity in all Europe and even in the East.

Remember that this dish can be served on any party, it does not matter who will be in attendance, the men in ties or simple nonconformists.

As mentioned above, prepare the cheesecake is very simple, but that does not mean that it does not require you to any effort. Basically there are two ways of cooking this kind of "pie". For those who loves to cook and has spared neither time nor effort, cheesecake will cook in the oven. The second method is ideal for lazy people, since according to him cheesecake does not require heat treatment.

For making cheesecake, use both the first and second embodiment, "Philadelphia" cheese, but this product is very expensive, so the replacement will fit any 30% cheese.

One teaspoon of baking powder.

Turn the oven to warm up, and meanwhile, prepare the two main layer of cheesecake. The first is preparing the bottom layer of cake. For this you will need to grind the cookies and mix it with melted butter. Place in a baking dish greased with butter and flatten. Start preparing the top layer. For this you need to mix the cheese with sour cream, bring the mixture until smooth. The time has come to deal with the starch, mix it with baking powder and add to the already mixed cheese with sour cream. Beat with a mixer proteins with salt, and then carefully, portions, add the cheese-yolk mixture. It's all carefully stir and put the dough in a baking pan over the layer of biscuits. Evenly spread the dough in the form (but don't smudge), and then submit the form for 90 minutes in the oven. Bake the pie at a low temperature, so you don't give the cheese the opportunity to boil. Do not remove the cake from the oven once the timer went off. Open the cover of the oven and allow the cheesecake to stand for 20 minutes. It gradual cooling will give your cookies their special taste.

In order to prepare a cheesecake for this recipe you will need, again, cheese, biscuits, butter, tin of condensed milk and spoon of lemon.

Similar to the first embodiment initially, preparing the first layer, then uniform and thin layer spread in any capacity. Cheese by using a mixer, beat with condensed milk, and then add lemon juice, beat again. Gently put the second layer on the first and cover with clingfilm. Send for a couple of hours in the fridge.

All your pie is ready, and nothing could be easier!
Is the advice useful?
Подписывайтесь на наш канал