How to build a triangular Rubik's cube

Use up to the present time the popularity of the cube Rubik's is not the only toy in the collection of such puzzles. In the 70-ies of the last century, the German Uwe Meffert, an engineer from Chisinau A. Horde independently from each other came up with similar fun – tetrahedron, also known as "Moldovan pyramid". This four-sided mechanical puzzle also aims to collect all items of one color on one side. 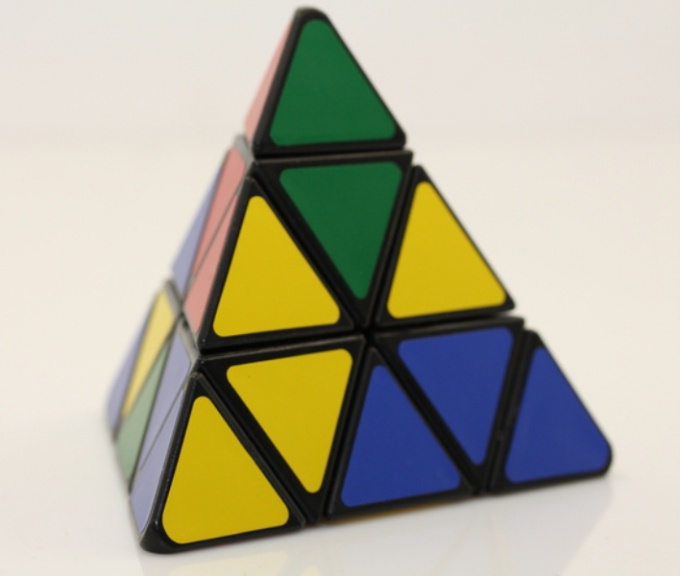 Related articles:
Instruction
1
Pick up a pyramid and a close look at it to understand the problem and possible solutions. The puzzle is made in the form of regular geometric solids (tetrahedron). Like the famous cube, it consists of elements which when rotated can move from one face to another. But instead of a cubes, such elements represent a small tetrahedra. The movement of the elements occurs around axes that are angled relative to each other.
2
First of all, expand all the top of the pyramid in their seats so that the color of their sides coincided with the average color of the corresponding element. Thus at any vertex must be formed rhombs, consisting of two monochromatic triangles.
3
Now, expand the average of the elements along with the vertices and edges of the pyramid to each face of the large tetrahedron was located only diamonds of the same color. Please note that under the sequential construction of the faces of the pyramid there is no need to pay attention to the destruction of previously constructed facets.
4
Make sure that each a certain edge built three diamond of the same color. To facilitate the search for such faces, it depends on what color it will be the one that is missing at the top, opposite to this face.
5
After the alignment of monochrome diamonds on each of the four faces, go to auxiliary operations. Translate rib elements from bottom to top, without disturbing the structure of diamond obtained in the previous commit operations.
6
Build your base, collecting the bottom layer of the pyramid. Thus, rib elements on the layer should have the same color with the construction line on the bottom.
7
Continue to build the middle layer, after which the pyramid can actually be considered collected. To set the rib elements use the successive rotation of the lateral faces of the pyramid, in which the set elements in corresponding color space by replacing edge elements.
8
Using mastered techniques of permutations of elements of a tetrahedron independently come up with the algorithms for constructing the beautiful symmetrical patterns on the faces of the puzzle.
Is the advice useful?
Присоединяйтесь к нам
New advices