How to repair the hole in the heating pipe

For each of us it is no secret that many things happen by Murphy's law. For example, only turned on the heating, as here, it was found that in the pipe flow. We need urgently to rectify the situation. 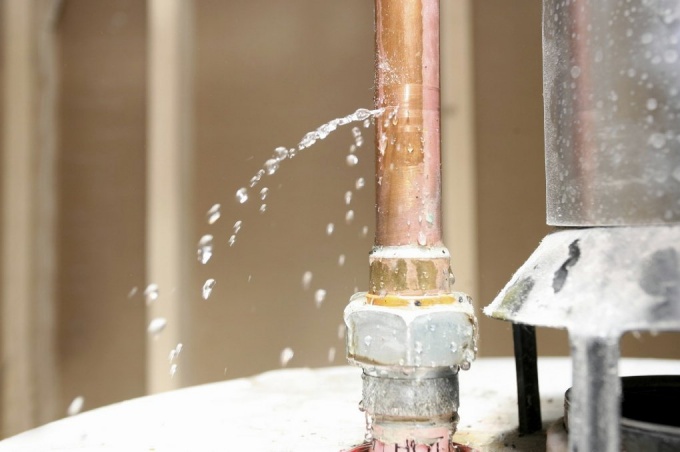 Related articles:
You will need
Instruction
1
Carefully examine the pipe taking on water. Make sure that the hole appeared only in one place, and unexpected "surprises" are expected.
2
Cut a narrow strip of rubber. Tightly wrap the rubber on the leak, covering a few inches from the hole on different sides.
3
Attach the rubber straps or binding wire. If you fix with clamps, one position directly above the hole and two on either side of her.
4
If there was a leak at the threaded connection fittings and pipe heating system, use hose clamps, single winding on a rubber patch and the second for fitting.
Note
Trying those or other methods to eliminate the leak pipe, remember that you don't just patch up the pipe with hot water, and close the hole formed on the pipe, the water which is under pressure. Be careful! The experiments result in unforeseen expenses, because flooding the neighbors, they will have to pay compensation for damages. However, it would not hurt to replace part of the communications in order to avoid a similar situation.
Useful advice
When using improvised fails to stop the leak and "patch" the hole in the pipe of the heating system, go to the nearest store, specializing in sales of plumbing fixtures. There buy a special bandage, which consists of dense rubber and analogue clamp covering the pipe with a hole on its perimeter. Fixed this "adaptation" with the bolts. With such a brace may be covered with an area of 60 mm square, and because pressed by "patch" is tightly, it is able to stop any leak. At the end of the heating season remove the deposited on the pipe bandage and take action, either by eliminating the hole in the pipe or perepanova connection or replacing the damaged section of pipe.
Is the advice useful?
Подписывайтесь на наш канал