How to find Sirius

Sirius – alpha Canis major – one of the brightest stars in the night sky. It can be observed from any point of the Earth, excluding the North region. Removed from the Solar system, at 8.6 light years and is one of the closest star to us. 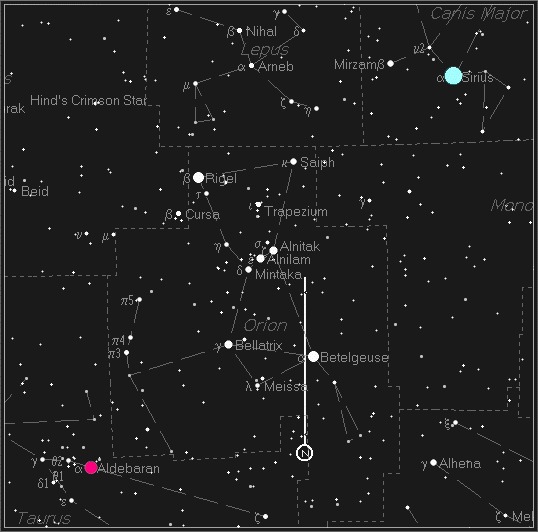 Related articles:
You will need
Instruction
1
Main features of SiriusandSirius is the brightest star in the constellation Canis major, and all of the night sky. In the Northern hemisphere, Sirius can be seen on top of the Winter triangle. Sirius brighter than the nearest star to the Sun alpha Centauri. If you know the exact coordinates, this star can be seen by day, provided the sky is clear, and the Sun is close to the horizon. Closest to Sirius,the star Procyon.Sirius is at a distance of 2.6 parsecs from the Sun. The star is the seventh planet from the Sun and the first ten of the brightest stars. Currently, Sirius is approaching us at a speed of 7.6 km/sec. so over time, the brightness of the stars will only grow.
2
Sirius A and Sirius InSirius is a double star, which consists of the stars Sirius A and the white dwarf Sirius B rotating around the center of mass with a period of about 50 years. The average distance between these stars is about 20. E., which is comparable with the distance from the Sun to Uranus. The visible star is called Sirius A. Sirius B at the greatest distance from Siriusand A (11 arc seconds) can be seen in a small telescope. Close to Siriusand he's A hard-to-reach for observation.
3
How to find the sky is SiriusSirius is in the southern hemisphere of the sky. Since the declination of Siriusand small, it can be observed up to 74 ° North latitude. In autumn is seen in the morning. In winter all night. In the spring some time after sunset. Sirius takes the sixth place among the brightest objects in earth's sky. Brighter the Sun, the moon, the planets Venus, Jupiter and Mars in the period of best visibility.The main reference point for observations – Orion's belt. Conducted through it straight one side will point to Aldebaran in the North-Western part of the sky, the other on Sirius in the South-Eastern part. Sirius and Aldebaran impossible to confuse as they are very different in color and brightness.Also Sirius can be found with the other stars: one should look for to the South-West of the bright star Procyon, 35 degrees North of Canopus, 30 degrees South of Alhena (the constellation Gemini) and 15 degrees East from Araba (the constellation of the Hare). The exact coordinates of Sirius: right ascension 06ч45м08.9173град., declination minus 16град42м58.017с. The Constellation Canis Major.Today Sirius is visible in the Northern hemisphere. However, approximately 11,000 years Sirius will not be visible generally in Europe.
Note
You should pay attention to the conditions of observation of the stars
Is the advice useful?
See also
Подписывайтесь на наш канал