How to find Sirius in the sky

Sirius is the largest star visible in our night sky. It is located in the constellation Canis major, the distance to it equal to 8.64 light-years or about 9.5 trillion km In size Sirius is almost 2.5 times more than the Sun. Find this star in the sky , focusing on other well-known constellations. 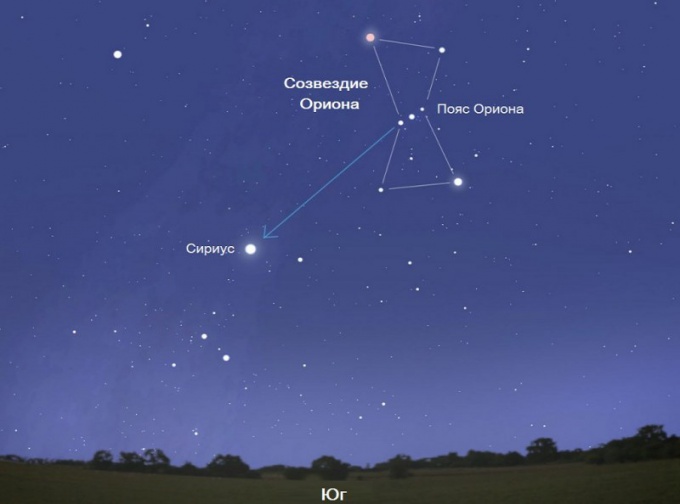 Related articles:
Instruction
1
In areas located in the middle zone of our country to observe this star in the southern sky. In the autumn it is already visible toward morning, in the spring of Sirius appears after the sun sets and the winter sky – from sunrise to sunset. In the winter, it is the constellation Canis is very low, almost at the horizon.
2
Despite the fact that Sirius refers to the star of the southern hemisphere, its declination is small, so to see it even in the far North, in such cities as Norilsk, Murmansk, Verkhoyansk – to 74 degrees North latitude. In summer, it rises high above the horizon and confidently it can be observed even in the sky near Petrozavodsk.
3
At its brightness of Sirius is on a par with such planets as Venus, Mars and Jupiter, they are clearly visible among the other shimmering in the night sky points. After the Sun, moon and the planets it occupies the sixth place on how well it is visible to the naked eye. No wonder people say his name, the star has received from the Greek word seirios – "brightly burning".
4
Quickly find Sirius in the sky , you can use the constellation of Orion, which, in turn, is easily identifiable by the three stars, located on one straight line. They are called "Orion's Belt". If you mentally continue this line, on which the stars of Orion's Belt in the South-East, in its sequel you'll see a bright star that stands out among others. This is Sirius. In the North-West of this mental line is the star Aldebaran. But even without knowing the directions, you won't confuse Sirius with the Aldebaran, which shines much fainter.
5
In that case, if you are targeting well represent the light side, and I know other stars to find Sirius . It is located South-West of the star Procyon in 35 degrees North of Canopus, or 30 degrees in a southerly direction from Alchemy (the third largest star in the constellation Gemini).
Useful advice
Astronomers predict that in 11,000 years, the Sirius will not be visible in Europe, and the constellation of the Great Dog will be circumpolar.
Is the advice useful?
Присоединяйтесь к нам
New advices