How to type Roman numbers on keyboard

In the ancient languages (Latin, Greek, Slavic) to record the numbers used is not specifically established characters, and the letters of the alphabet. From abbreviations and words, they usually did not differ, but sometimes added to them special decorations. Roman numerals such decorations do not have. 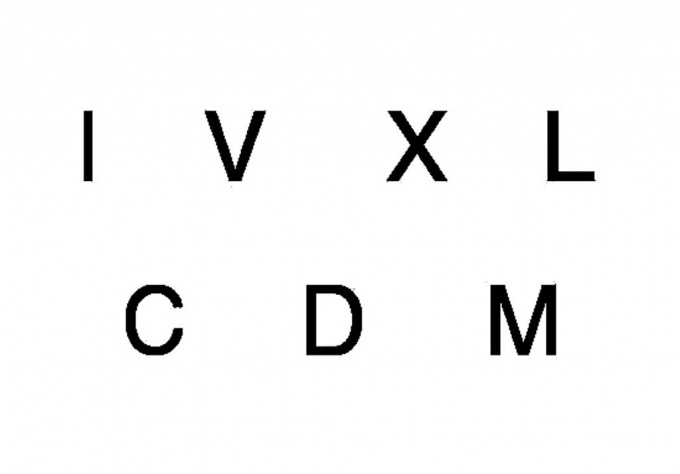 Related articles:
Instruction
1
To represent the unit in the system of Roman numerals uses the uppercase letter "I" (read "I", equivalent to the English "ay"). Numbers 2 and 3 are denoted by the corresponding number of letters “I, II, III. Numbers are written without quotation marks.
2
The number 5 is denoted by the Latin letter “V”. The number 4 is denoted as the letters: IV. Otherwise, you can read this number as: one less than five. Number six to eight are depicted as letters “V” and the appropriate number “I” on the right (one to three).
3
Ten is denoted by the letter “X”. Nine will, if you ascribe to the left of the letter “I”. From eleven to nineteen the numbers are written on the same principle as in the first ten, but the left is attributed to the letter “X”.
4
The number 50 is denoted by “L”. Assigning “X” to the left or right, you get 40 or 60, respectively. Additional "x" to the right are numbers 70 and 80.
5
Hundred to three hundred are identified by the letter “C”, five hundred “D”. Attributing the letter denoting the number of smaller discharge, left or right, you will receive a number one, ten, a hundred, less or more, respectively.
6
One thousand is indicated by the letter “M”. Twice or three times the repetition of letters indicates the corresponding number of thousands. For example, 2011 will be denoted as: MMXI.
7
A complete list of numbers and their corresponding letter combinations represented in the illustration. Use the corresponding Latin letters to denote numbers.
Is the advice useful?
See also
Подписывайтесь на наш канал