How to assemble a Rubik's Cube child

Cube Rubik appeared in the eighties of the last century, but still continues to be one of the most popular puzzles for children and adults. Today we have many ways to build, ranging from "speed" (movement and remembered, respectively, for the Assembly required less moves to a slower, but require less number of movements to be memorized. 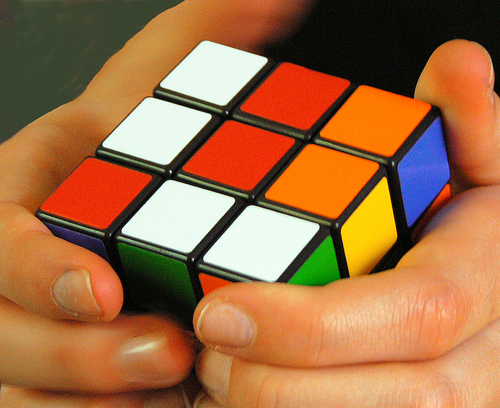 Related articles:
You will need
Instruction
1
First of all, determine face color, which is the top and take the cube in his hands so that the Central cube, the top plane was the right color.
2
The next step is to collect a cross on the top face so that the second color of each of the middle blocks correspond to the color of the Central cubes of the side faces.
3
In the third stage correctly exposed corner cubes top face. The next stage is to put a second layer of cube Rubik. It is necessary to remember that before you begin to assemble the last layer, you must return to the place all the cubes of the first and second layers that have been moved in the Assembly process.
4
The most difficult is the Assembly of the last layer, which is in this case lower. Better to start with installing in its place the corner cubes so that all three of their colors will match the colors of the Central cubes in contact with them faces.
5
And finally, check the middle blocks lower faces and swap them if necessary.
Note
In addition, before you start teaching a preschool child, parents should learn the method on their own, older children will be able to master the technique of Assembly and without the help of parents, using the proposed scheme.

There was a method build for beginners who is able to master a child at the age of six or seven years. This method contains a limited number of moves and easy to learn. The scheme of this Assembly method was proposed quite a long time in the popular magazine "Young technician". A few movements the child will have to memorize, but not formulas like adults do, but rather mnemonics.
Useful advice
If the leaf will be drawn prompts, after a few builds under your guidance, the child will be able to solve the cube completely on their own. Most importantly, he wanted to do it. After all, in order to learn something must first be tempted.
Is the advice useful?
Присоединяйтесь к нам
New advices