How does social network Little Monsters

The world-famous outrageous singer Lady Gaga has opened her own social network Little Monsters "Little Monsters". That's how she calls her fans, talking to them from the pages of the Internet project. 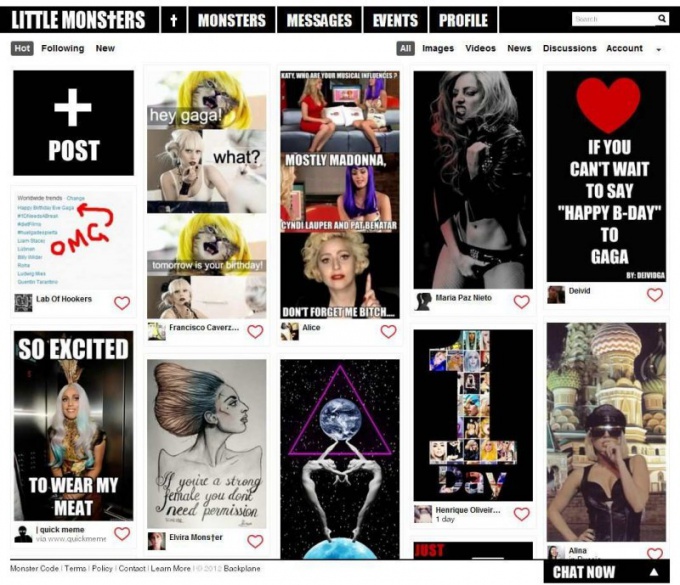 Little Monsters is not positioning itself as a counterpart or competitor to Twitter, YouTube or Facebook. Her goal is to provide the opportunity to communicate the singer's fans as their idol, and among themselves. Also with the new project, the singer hopes to unite his 19 million followers on Twitter and 47 million fans on Facebook, 330 thousand subscribers in Google+. While Little Monsters accepts new members by invitation only, what is fundamentally different from existing social networks.

In its structure, Little Monsters is similar to Pinterest and Reddit. Lady Gaga and her fans are free to post on the project with a variety of content, one way or another associated with the flamboyant singer. After placing the material users can vote for or against each particular video, article or audio recordings. Thus, a rating of the published materials. Each new user is automatically considered to be a fan of Lady Gaga. Another important feature designed to bring together fans from different countries, became multilingual chats. Built-in online translator allows all participants to communicate with each other without experiencing language difficulties.

Little Monsters also offers the ability to edit the photos. The service is simple and easy to use as well as an online version of Photoshop. The social network allows fans to buy concert tickets Lady Gaga, to force memes, first to learn the news directly from his idol. Looking through the profiles of other users, you can find out their overall level of engagement and activity, the number of visited concerts.