Rhythmic gymnastics is the girls performing various gymnastic and dance exercises with ball, Hoop, rope, clubs or ribbon under musical soundtrack. The choice of music is arbitrary, the performance lasts between one and a half minutes on the gymnastics carpet square shape with a side of 13 meters. 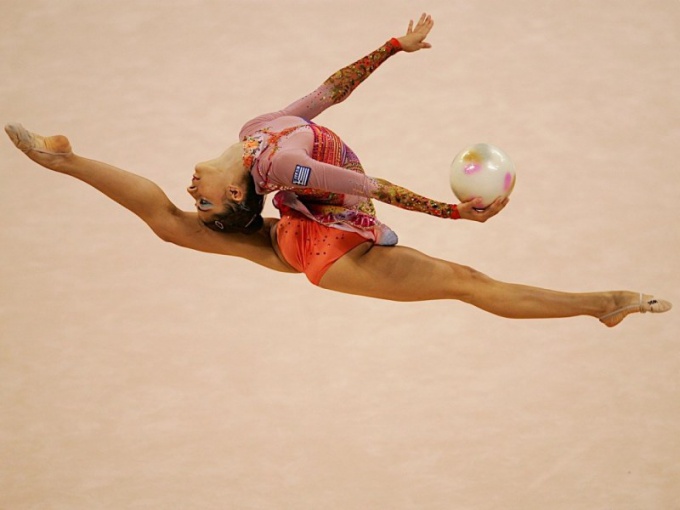 Rhythmic gymnastics is one of the most beautiful and spectacular sports. She appeared with the Mariinsky ballet in the early twentieth century. In a relatively short period of rhythmic gymnastics has won wide popularity. In 1948 the first championship of the USSR, from the mid 50 years, athletes began to go to Europe for demonstrations. In December 1963 was held the first international competitions – the European Cup. And in 1967 began to hold competitions between athletes in individual events, but in the group exercises.

Exercises with the ball are throwing catching and throwing a ball from one hand to another. Also involved here and the legs, head, and shoulders. Sharp throws are combined with gymnastic exercises athletes (rolls, somersaults).

Exercises with a Hoop related with the rotation of the ring on the hands, torso, legs and the neck of the gymnast. Program execution is also accompanied by various exercises.

View rhythmic gymnastics rope includes various jumping and jumping. During exercise athletes should rotate the rope in accordance with the tempo and rhythm of movements.

Exercises with clubs include swings, throws, rolls items the sweat body of the athlete or the Playground. Runtime manipulation of the gymnast performs flips, turns and other complex movements.

Gymnastics with ribbons is a continuous formation of a band of different "drawings". Lena is attached to a wooden stick that holds a gymnast. Movements are swings, throws, perebrosa and interceptions. Exercises are performed in different directions, planes and rhythm. During action ribbon, the athlete performs gymnastic exercises, such as turns, jumps.

Any performance gymnasts should organically fit into the music, reflecting the nature and composition of the melody.

To promote the technical side of performances of gymnasts and reduce the subjectivity in judges ' evaluations of the international gymnastics Federation changed the rules a few times. For example, since 2009, the performances are assessed three teams of judges, at 30-Tabellini scale. The first team split into two groups makes the evaluation technique. One of them estimates the total equipment of the athletes, and the second technique with the subject. Each group consists of two judges. Estimates are summed up and calculated the arithmetic mean of the number. The second brigade, consisting of four judges, evaluates artistry and choreography, and a third group, monitors the mistakes in the speech, taking off points for them. The final judging score consists of the sum of scores of all three teams.