How to cook meat, stewed with vegetables

Meat stewed with vegetables is a dish that can be prepared quickly and simply. It does not require constant attention of the hostess, so it is convenient to do parallel with other dishes. 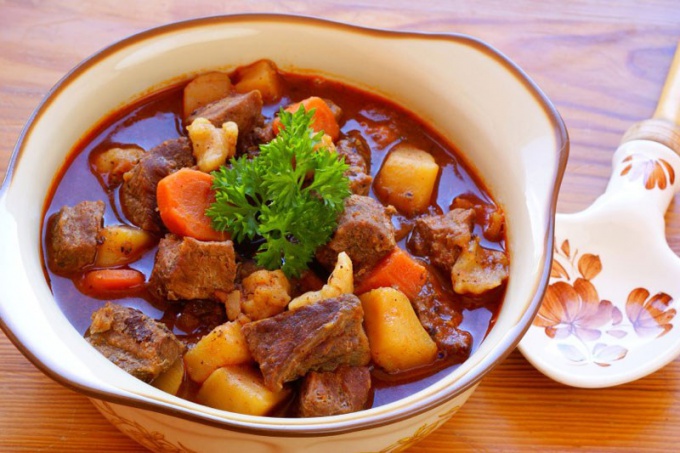 Related articles:
You will need
Instruction
1
Cook beef with vegetables. For this the meat is cut into pieces with sides of about five centimeters. Then lard them with lard. To do this in fillet small incisions where and insert the slices of bacon. Put the meat in a greased form and put in the oven for 10 minutes, bake the meat at 200 degrees.
2
Join in the preparation of vegetables. onion cut into half rings, onion - small cubes, and celery stalks. Chop the strips of bell pepper and leeks. Carrots cut into thin slices. Mix the vegetables in the pan with the meat, pour a mixture of wine and water, and then put the canned or fresh tomatoes without skin. Simmer the mixture on low heat for an hour, covered, until tender beef. Salt and pepper the dish before it is done, can also add to the taste of the herbs. If you like thicker sauce, put in a pan 2-3 tablespoons of flour and stir.
3
Try other options like prescription. For example, beef can be roll in flour and pre-fry in oil, not baked. The same should be done with vegetables. This dish is less dietary than the first option.
4
When cooking pork and chicken with vegetables reduce cooking time - just half an hour. Also for satiety you can add potatoes to the stew. Because it is poorly prepared in an acidic environment, it is best simmer meat with wine sauce, and broth or with sour cream.
5
Use when cooking a stew of seasonal vegetables. In late summer and autumn you can appreciate the taste of the stew with the eggplant. To do this, slice the meat, preferably beef or lamb, a little fry in oil. Add to the pan chopped onion, eggplant and tomatoes, as well as prepared meat. Season with salt and pepper. Simmer until tender, adding a little sour cream and, if necessary, adding water.
Is the advice useful?
Подписывайтесь на наш канал