How to draw human proportion 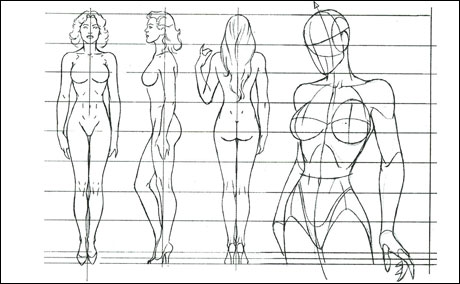 Related articles:
Instruction
1
Draw on a sheet of paper a vertical line, the upper point of which coincides with the top personand the bottom with the feet. Divide the line into eight parts – each part is equal to the height of the head of a man.
2
The widest part of the figure is two whole and one third of the width of the head. Using as guide lines established subsidiary labels, start to paint the figure of a man, given the ratio of the parts of the body.
3
The waist always needs to be slightly wider than the head, and the elbows are in line with the navel. The lower edge of the knees placed on a distance of one quarter of the figure from the point of the feet, and draw the shoulders at a distance of one-sixth of the points of the crown.
4
Drawing female figure, remember that it is much narrower and sleeker than the male figure. In the widest part of a female figure equal to the width of two heads. The width of a woman's waist is equal to the width of one head. The anterior surface of the thighs in women is wider underarms, and back – already. Men's hips are much narrower for women.
5
Place the navel on the female figure below the waist, and keep the elbows slightly above the navel. All these factors make the female figure distinguishable from the male. Try to draw a female and male figure in different angles – front, back and side. This will allow you to get the most adequate idea of the proportions and their combinations.
Is the advice useful?
Подписывайтесь на наш канал