How to make bacon soft

To salty the bacon was tasty and soft, you need to choose the store fresh fat. A good product needs to be without the beard, have white or pale pink. The best fat – from the back, it is malleable and soft. The knife should be easy as into butter. Recipes for salting bacon huge variety for every taste. 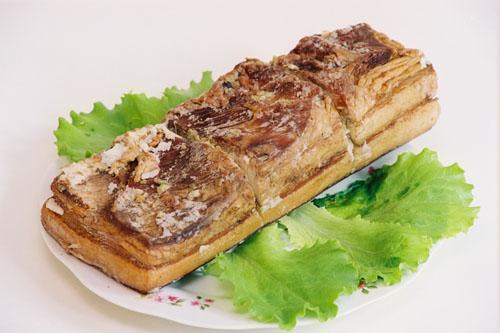 Related articles:
You will need
Instruction
1
Take a clean box and in this line a rimmed parchment paper, leaving part of her to dangle from the edges of the box, so after laying the bacon this paper, it can be cover.
2
On the bottom of the box (on top of paper) sprinkle a small layer of salt.
3
Slice the pork belly or bacon into small pieces.
4
RUB the pieces with salt and put in a box, sprinkling each row with salt.
5
Burying the past a number of salt, fat cover with paper and top to position the load.
6
Place the box in a cool place for two weeks, after which the product can be consumed.
7
To salty the bacon was soft, it must be boiled in onion skins. To do this in a pan put the husk onion, Bay leaf, pepper and cover with water.
8
Brine bring to a boil.
9
Put the fat in the pan so that it was all covered with brine, and simmer for 15 minutes.
10
The pan remove from heat.
11
Leave the bacon in brine for a day. Put the cooled pot in the fridge.
12
Remove the bacon from the brine and allow to drain excess fluid.
13
Peel garlic and pass it through the press.
14
Ready fat liberally coat with garlic on all sides and place on the day in the cold. Bon appetit!
Note
Before salting it is possible to sustain fat in water for about twelve hours. So it will become even softer.
Useful advice
The gap that remains between the pieces of bacon, and between the paper and bacon, tightly cover them with salt. Store the finished product in the freezer.
Is the advice useful?
See also
Подписывайтесь на наш канал