How to cook Peking duck

You might be surprised, but the Peking duck and Peking duck are two different dishes. Of course, not completely different, but fundamentally different. Peking duck is, first, a duck of a certain breed, grown by special technology, similar to the one on which feed geese for foie Gras. Secondly, it's a duck weighing not more but also not less than 2 kilograms 200 grams (a tolerance of 50 grams). Thirdly, it is a duck cooked in a brick oven on the wood of fruit trees. Because at home to meet all of these conditions is impossible, we can only try to imitate this amazing delicate taste of the bird, covered with glossy reddish crust and call it Peking duck. 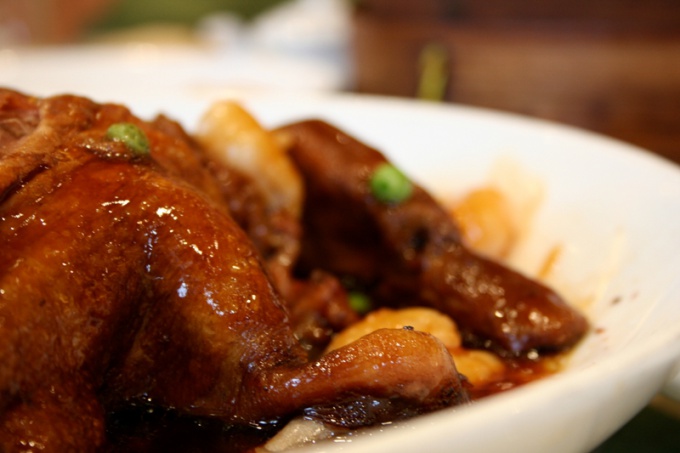 You will need
Instruction
1
Duck Peking start cooking two days before serving.Put on the fire a large,3-liter pot with water and bring to the boil.
Prepare the duck. Cut off the extreme joints of the wings, the fat on the tail and around the neck. Wash the duck, dry it, put the pump between the skin and meat, and "blow out" a bird so that all the skin separated from the flesh.
Put the duck on a rack over a sink and using a ladle, boil on all sides with boiling water. You need to skin the ride was completely white. This way you will narrow the pores on the skin of the bird and will not allow the fat to flow out.
2
Thoroughly dry the duck inside and out. You can even use a Hairdryer. Leave on the grill, under the grate, put a large, deep bowl.
3
Put on the fire a small saucepan with the vinegar, wine, honey, peeled and grated ginger root and spices. Bring the marinade to a boil and cook for 15 minutes, stirring occasionally. Dissolve the starch in ¼ Cup of warm water and put in the marinade, stir thoroughly. Wait until the liquid thickens to syrup, remove from the heat and begin to coat the duck on all sides.
4
Marinade, stecchi with the ducks and save. Very upright bird "sits" on the bottle and put it in a warm, well ventilated room. Do not forget to put under her bowl, which will drain fluid from the ducks. Leave for 4 hours.
5
Heat the marinade and again greased duck. Repeat the whole procedure but this time leave the duck for 6 hours. Again heat the marinade, smear the bird and put them in the same place for a period of 12 to 24 hours.
6
Preheat the oven to 220 degrees Celsius and put on the grill the duck breast up. Put down the laid foil pan. Roast the duck for 15 minutes and turn it back up. After 15 minutes reduce the heat to 175 degrees Celsius and jaimee about an hour. Get the duck from the oven and allow it to cool for seven minutes.
7
Until a duck is baked, prepare the crepes and sauce.
For pancakes the flour is brewed with boiling water, kneaded and put it on half an hour. Roll dough two flagella with a diameter of 3 cm and cut each into 10 pieces.make two flat pancakes, we coat them with sesame oil, put the greased side on top of each other and roll out into a thin pancake, with a diameter of not less than 15 centimeters. Fry it on a dry large frying pan until Golden spots and raskinem the cake in two thin pancakes. Keep pancakes in a sieve for a couple.
8
For the sauce combine all the ingredients, boil and allow to cool.
9
Cut onion, cucumber peel and cut into thin long strips.Ready duck sliced and served with pancakes, cucumber and spring onion. Eat it on pancakes smeared with sauce, put onion and cucumber, a piece of duck, wrap and enjoy.
Is the advice useful?
Присоединяйтесь к нам
New advices