How to draw hexagonal prism

Prism ("something sawn-off" in Greek) consists of the two bases of the same shape, which lie in parallel planes and lateral faces. The side faces have the shape of a parallelogram, and their number depends on the number of vertices in the polygons of the bases. Draw a figure with the base of the regular hexagonal shape by using a different accessory builds. 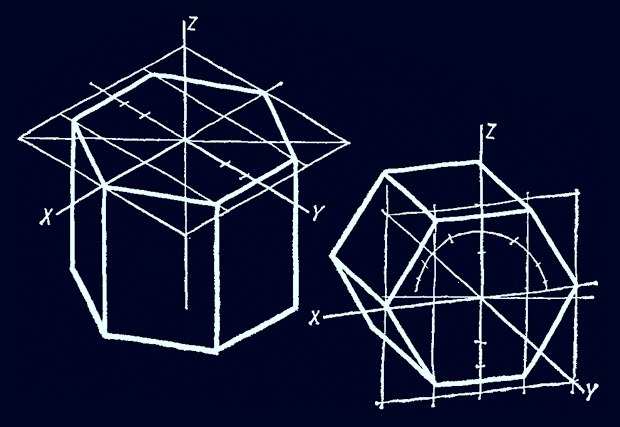 Related articles:
You will need
Instruction
1
Put an arbitrary point at the left edge of the sheet, leaving from the top edge approximately one third the height of the drawing. From it, draw a horizontal line to the same point on the right. Through the midpoint of the segment perpendicular guide, measure out in both directions from its intersection with the horizontal cut about a third of the length of a horizontal line and put there a couple of points. Connect the four dots, drawing in this way a diamond - rectangular isometric square. It will be inscribed upper hexagonal base of the prism.
2
Draw a line through the middle of the left bottom and right top sides of the diamond can be considered the x-axis of the coordinate system and the intersection points with the sides of a rhombus are two opposite vertices of a hexagon. Label the bottom left vertex of the letter A, and the upper right - the letter D.
3
Divide the line segment AD into four equal parts and mark three of the support points. Through each point draw straight, parallel to the lower left and upper right sides of the diamond. Video drawn through the midpoint, will mean the y-axis. The length of the segment AD and multiply by the number equal to ¼ *√3 (approximately 0,43), put the resulting distance in both directions from the intersection of the ordinate to the segment of the AD and put a couple of subsidiary points.
4
Through these points draw lines parallel to the top left and bottom right sides of the diamond. In their intersections with two conducted in the previous step lines (excluding the line y-axis) dot - it will be missing four vertices of the upper base of the prism. Label them in counter-clockwise direction with the letters of the English alphabet - start with B (point to the right of the existing A).
5
Connect the dots in pairs, drawing in this way, the hexagon of the upper base of the prism.
6
Vertical diagonal of the rhombus can be considered a applicator that con axis of the rectangular coordinate system. From the points F, A, B, C, swipe down cuts parallel to this axis. The lengths of segments must be identical and equal to the height of the prism. If the prism needs to be tilted and not straight, these segments need an appropriate angle to the axis of the applicator that con.
7
The ends of the lines also connect in pairs are the visible vertices of the lower base of the prism. This drawing can be considered finished - it shows all visible from this angle of the face (upper hexagonal base and three lateral faces). Optionally, the dotted lines depict the edges of the invisible parts of the figure, the same way having a vertical parting from the rest of the points and also connecting their lower ends in pairs.
Is the advice useful?
See also
Подписывайтесь на наш канал