Where the swallows fly away

The swallows are beautiful little birds, bright-eyed inhabitants of urban and rural landscapes. Every spring they arrive, hatching and in the fall they leave their homes. Where to go to spend the winter these birds? 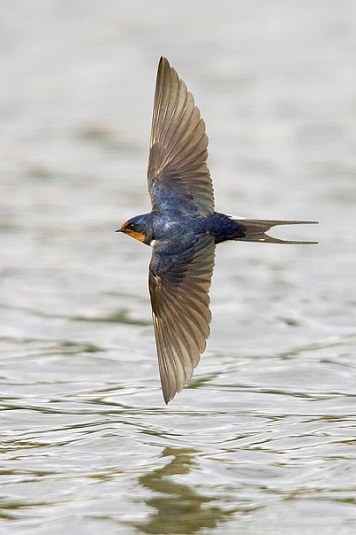 Related articles:
Swallows is a tireless aerial hunters of insects. They are impossible to confuse with anyone else, as they have distinctive features: blue-black "tie", a light breast and forked tail. Flight speed 60 km/h, but the trajectory is very changeable and unpredictable. A large number of these graceful birds can be seen close to grazing herds, around which the hovering mosquitoes, midges, horseflies. These insects form the basis of the diet of adults and Chicks. For the nests the swallows choose a vertical surface: in the wild, cliff, cliffs rivers, in settlements – eaves, roofs, etc Building material for their homes they gather on the banks of the reservoirs.The area of distribution of species of the family lastoctober is large enough. They do not occur only in the regions of the far North. The time of arrival of swallows to nest depends on the geographical location of the region: in the southern areas they appear in April, and in Northern and middle latitudes in may. In the winter these birds fly one of the first in August-September. Usually moved in large flocks in the daytime, although there are exceptions.A few centuries ago thought that swallows hibernate at the bottom of reservoirs, buried in the mud, and with the onset of spring out on the surface. This erroneous opinion was formed due to the fact that during the flight a large number of birds stop for the night in the coastal thickets. Through the banding was tracked to the main ways of migration of swallows. In addition, using this method scientists were able to establish the exact wintering grounds of specific populations. For example, species breeding in Eastern Europe, heading South and East, Republic of South Africa, and individuals from Central and Western Europe and fly to Thailand, Southeast Asia, Africa, sub-Saharan Africa (Liberia, Congo and others). Swallows make the long flights among the birds of passerine – 9-12 thousand miles. The distance they overcome in 2-3 months. The record for long-haul flights are sea swallows – Sterne, flying annually about 40 000 km.
Is the advice useful?
See also
Присоединяйтесь к нам
New advices