Where to go in Volgograd

Volgograd – hero city, which is located in the South-East of the European part of Russia, in the lower reaches of the great river Volga. This wonderful city has many interesting attractions, which are mostly connected with the history of the great Patriotic war. 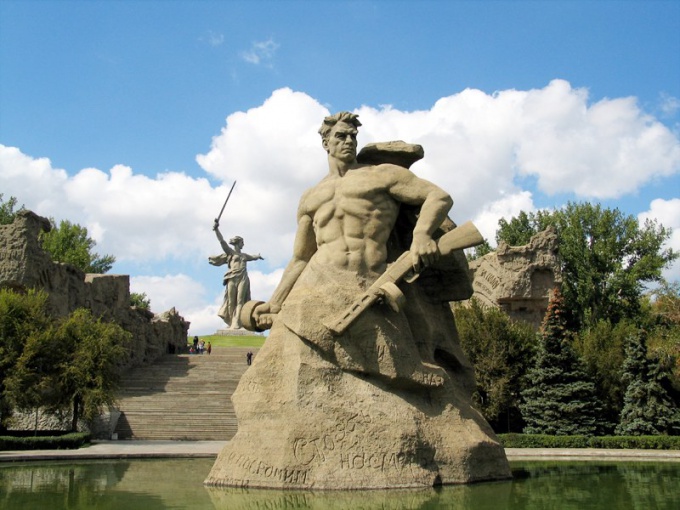 The main attraction of Volgograd is Mamayev Kurgan is a place of worship for the deeds of the heroic defenders of the Fatherland. During the battle of Stalingrad here the ground was strewn with dead soldiers and exploding shells. The Central sculpture Mamayev Kurgan – Motherland calls, which is among the seven wonders of Russia.

On the high relief "Memory generations" depicts people walking with banners and wreaths at the top of the mound, to honor the memory of fallen heroes. On the square at the entrance there are twelve niches, made of granite, they are following the city-hero Smolensk, Sevastopol, Murmansk, Novorossiysk, Odessa, Leningrad, Minsk, Tula, Kiev, Fortress Brest, Kerch and Moscow. In the area of "Standing to death" there is the sculpture of a brave soldier facing the protection of the homeland from the river.

Ascending the granite staircase, you will hear songs of war and reports from the news that immerse you in the atmosphere of the hard time. Walls, ruins symbolize the oath of the defenders of Stalingrad. In the center is a "Hall of military glory", where immortalized the names of the defenders, there is a monument – a torch with an eternal flame that never goes out and will be lit in honor and memory of fallen soldiers. Close to the grieving mother that holds the dead soldier on your hands, there is a swimming pool "Lake of tears".

Visit the Museum "Stalingrad battle", it was opened in 1985 and is one of the main attractions of Volgograd. The main monument of the Museum is the artistic panorama, titled "the Defeat Nazi troops under Stalingrad". This panorama conveys the courage and strength of the defenders, fighting for their country. The exposition of the Museum contains thousands of artifacts that reveal the history of the battle of Stalingrad: awards, documents, personal belongings of military commanders and defenders of the city, weapons.

Central embankment of Volgograd is an architectural composition with the picturesque alleys, a number of monuments and parks. The promenade is named in honor of the 62nd army, which defended the Northern part of the city during the battles.

Hero city is a great opportunity for a versatile and varied holiday. Visiting the famous monuments of the great Patriotic war, and museums, you can admire the beautiful landscape and relax in a café, nightclub and restaurant. Visit shopping malls where you can buy Souvenirs for friends and family with the symbol of Volgograd.

The beaches along the Volga river are considered to be a favorite place for visitors and residents. Some of them are landscaped, where you can have fun on different rides, swim, sunbathe, drink a glass of juice and admire the scenery. Regularly on the river there is a boat where you can ride and explore from the deck all the sights of Volgograd .