How to do tricks on a skateboard for your fingers

Skate for fingers — fingerboard — allows you to do the same tricks, and skateboard. This toy develops not only dexterity of fingers and motor skills of the child, but discipline, since the execution of each trick takes training. 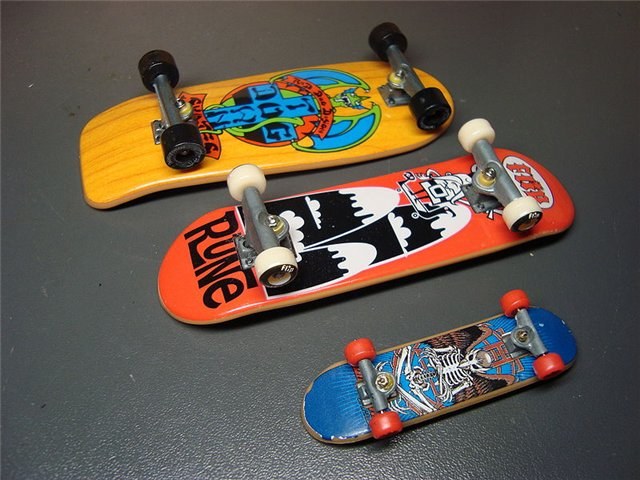 Related articles:
You will need
Instruction
1
Most of the tricks of the fingerboard is based on the basic Ollie. Learning to do this trick, you will be able to master other, more complicated. The trick Ollie fingerboard separates from the surface using a push. The fingers in this point should remain on the Board. Put your middle finger on the tail of the Board, in the area of the screws. Leave index finger on the middle of the Board.
2
Push your middle finger on the skate. It must be like a sharp blow to the surface on which the fingerboard. The middle finger during the impact does not come off the Board and remains in the same position. When skate will fly up, move the index finger up and to the side. Try to keep the middle finger was still on the Board. This is Ollie. Skate is in the air, but the fingers come into contact with its surface.
3
In flight control a skateboard using your index finger. At the right time, move middle finger on a skateboard in the area of the screws. And carefully lower the fingerboard to the surface. When you master this trick from a static position, try to do it during the movement of the fingerboard. If you make the same jump, moving the fingers so that the forefinger will be on the front screws, then the trick will be called Nolly.
4
Other tricks on a skateboard Ollie vkluchaut in itself. For example, the trick is to Pop the seam of it. It lies in the fact that at the time of the jump scroll to the Board in a horizontal plane 180 degrees. To hone one trick can a week, but over time, the dexterity of the fingers will develop so that learning a new trick can take an hour or two. Regular workouts two to three times a week will help to maintain skills.
Useful advice
If you can not get the trick, try it five to seven times. Or even postpone the activity fingerbord this day. Another time trick can get you immediately. For the rest time muscle memory will erase all the wrong moves. Thus, the gained technique can be maintained for a long time.
Is the advice useful?
Подписывайтесь на наш канал