How to bake pita bread

Pete - the traditional Arabic bread, known since ancient times. It is prepared from unleavened dough and can stored for a long time. Pete gained a lot of popularity and love in the world, it is often used for making hot sandwiches, since the pellet has a convenient "pocket" for the stuffing. 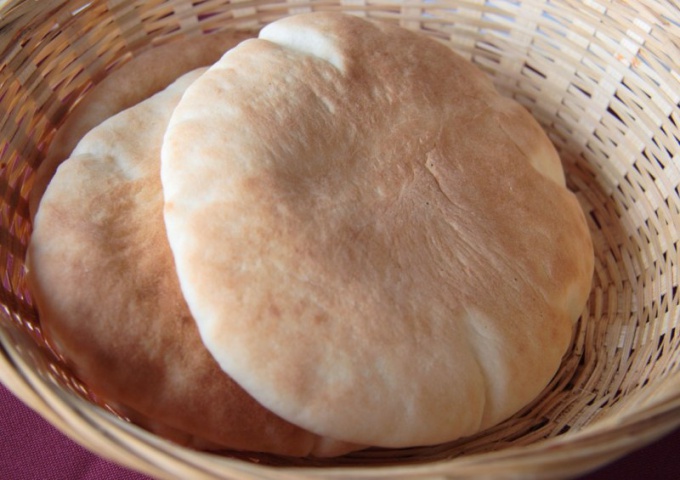 Related articles:
You will need
Instruction
1
Heat 250 ml of water, mix it with one tablespoon of olive oil. Sift the flour through a sieve, add the yeast, salt. Pour half of the flour in water, knead well all the time in one direction, until a thick mass (you can use half flour not sifted). Then add second half of flour, knead, roll the dough into a ball, cover with a tea towel and leave in a warm place for half an hour.
2
Knead the dough for ten minutes, grease a bowl with oil, put the ball of dough, cover with a tea towel and again leave for an hour in a warm place (until it doubles). Sprinkle hands with flour, divide the dough into ten equal parts, roll from them balls, then roll tortillas one or half an inch thick, with a diameter of about ten to fifteen centimeters. Cover the finished tortillas with a towel while the others are rolled.
3
Preheat the oven to 240оС on the bottom put the baking sheet with water to produce hot steam, which is essential when baking, so Pete quickly stood up and formed a "pocket" inside. Grease a baking sheet with vegetable oil or cover with foil, put it in the oven and heat until very hot.
4
Place on the hot baking tray pita, place in the hot upper level in the oven and bake for three to five minutes (tortillas should vspyhnut, but not to overdo them or they will turn dry and brittle).
5
Eat a pita, but warm: ready-made cakes straight from the oven, put in a pile and wrap in foil sheet. If you bake the pita for future use, allow it to cool in the foil pellet, without unfolding, put it in the freezer. To serve, take out of the freezer, unwrap, thaw, then wrap in foil and put in not hot oven (about 150 ° C) for fifteen minutes.
Is the advice useful?
Присоединяйтесь к нам
New advices