Peace cereals enriched significantly in recent times. More recently, in one part of the world really didn't know what grains are grown on the other. In addition, displays all new varieties of cereals are already known, obtaining a unique composition and taste qualities of the product. The choice is so great that we need not worry about how to diversify the diet. This is especially important for vegetarians, because it is from grains and beans they are getting the body needs protein. 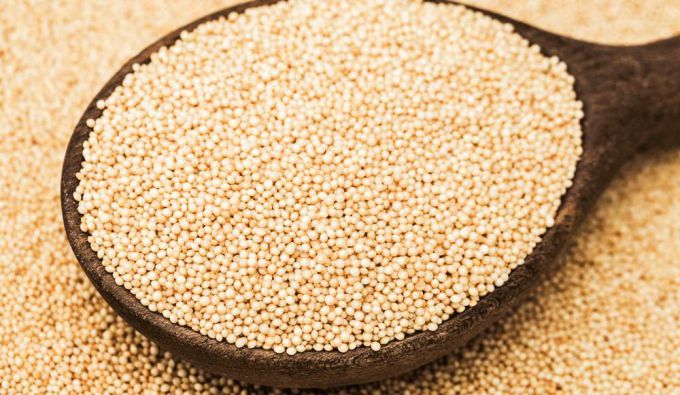 A relatively new product for us — the amaranth. In Mexico it is used for thousands of years, along with corn and other legumes. In appearance it is a yellowish small grains. At this cereal very interesting flavor, nutty, a bit like cakes. Oatmeal this cereal will definitely loved by children. Due to this property, milled amaranth is good to use in baking, especially if you are interested in gluten-free foods. Amaranth is perfect as a garnish to any dish.

Teff - another unusual and quite new to us culture. This herbaceous plant has been grown in the mountainous regions of Ethiopia. In fact, a kind of millet, but grain Teff is much smaller. Culture contains large amounts of iron, which is very useful for blood. From Teff makes an excellent gluten-free flour. Dark (or red Teff) has a more intense sweet taste, it is perfect for desserts based on it. The lighter variety is often used for the diet. In Africa from such flour bake cakes, substitute bread.

Hybrid of wheat and rye, wearing a funny name triticale, a great source of energy. Not rarely triticale added to muesli, which is significantly enriched with antioxidants your Breakfast. And the bread from such flour stays soft, is another unique property of the culture.

The Frick not so much a new cereal as a new method of processing wheat. Very young, still soft wheat grains are roasted. The result is a product similar to bulgur, but with a more intense smoked flavor. Barley is very popular as a garnish in Arab countries. The Frick is actively used instead of rice, because it is rich in fiber, but protein in it twice.

Kamut is another distant relative of wheat originally from Egypt. Grains Kamut larger than wheat and resemble beans. Kumut has overtaken its ancestor and on the content of useful elements, especially magnesium, zinc and vitamin E. Kamut Flour has a yellow color and has a buttery flavor. Due to the large protein content of Kamut actively absorbs moisture, so replacing them with wheat flour, add more water and the Kamut berries to use a third less.