Rules of investment in foreign currency in 2016

Buying foreign currency is probably the most popular way of saving money in a crisis. Under the acquisition currency usually means buying dollar. "American" as he began a rapid ascent in December of 2014, and now regularly updates the highs. For example, on 21 January, he ran for 85 rubles. Investors rushed to buy the currency, fearing further devaluation of the ruble. But does that make it right? 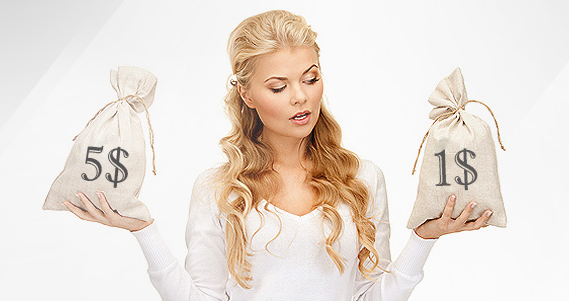 When is the best time to buy the dollar?

Many novice investors assume the giant strategic error when you start buying the dollar, with its rapid growth. In the end, they buy the currency at the maximum, and then it rapidly becomes cheaper as growing. This has often happened – just look at the graph the us dollar over the past two years on the daily timeframe. When buying foreign currency operates a simple rule: buy when the price drops or is close to the previous low and sell – high. From February to April, the ruble traditionally stronger due to several reasons:

– at this time it is necessary peak of payments of taxes, and the taxes in Russia are paid in rubles, therefore currency sold;

– oil prices are slightly more expensive or at least not falling in price as consumption increases (winter, cold);

– state "make up" the budget and the purchase of gold for the formation of reserves, and this, in turn, weakens the dollar (gold prices and the dollar are in inverse proportion);

– published the first reports on the profitability of Russian companies and the Russian state budget, and usually they are more or less optimistic.

Therefore, buying the dollar in this period, the most profitable. Note, however, that it is a long term investment, re-growth is quite natural to expect the end of the year. And during this time is likely to have to wait out the drawdown.

But only one dollar to focus not worth it. Of course, hardly a world currency in the next 2-3 years, something threatening, although many radical analysts predict a quick death "American" because of the bloat the US budget and the incredible foreign debt. However, if you convert rubles into dollars only, it is possible to miscalculate and not see other promising currencies. Experts advise to diversify your portfolio of banknotes from at least one country, but preferably two or three.

What? Try to understand the major candidates.

Of course, the single European currency – the first in this list. Not all experts confer on Euro hopes, especially after all the tricks that the "European" cut in the past year amid the Greek crisis. It is likely a repetition of the situation – if not with Greece, then with other candidates on a departure from the European Union – Spain, Italy, UK. And not the fact that the country out of the EU because of the weak economy – Britain, for example, repeatedly stated that she was not satisfied with the weakness of the Euro zone and she would like a more substantial strengthening of the pound, and in conjunction with the "European" is difficult. So if Europe starts to "kink", it will affect the Euro, even if the currency is not traded in the territory of the state. So I would still have thought a hundred times before you buy "European".

The British currency is not a too exotic way of cost savings. A lot of investors use the pound as an alternative to the Euro or the Swiss franc, especially against the background of instability in the Euro zone. The UK economy is fairly stable, and the bearish trend of the second half of 2015 finally replaced rise. The only thing that stops investors is the possible separation of Scotland, which, of course, will affect the pound is not the best way. However, the part of capital can be converted into British currency.

Abenomics is yielding positive results, which are expressed mainly in the growth of GDP and the growth of the Japanese stock market. But the exchange rate measures Shinzo Abe has affected not the best way – devalue the currency like the ruble. However, due to the export growth fails to contain the fall of the yen. It is possible that, when the Central Bank of Japan, achieving the desired level of inflation, will no longer increase the money supply, the yen stabiliziruemost. Currently I don't recommend active use of the yen as an alternative currency in the portfolio, but you can look at to Japanese equities.

The Chinese currency is probably the most promising of all these.

Several reasons for this:

– the worst thing that could happen to the Chinese economy has already happened (meaning the devaluation of the yuan and the fall of the stock index), and consequently, new crises can not wait so soon;

– the Chinese economy remains developing so growth potential is there, and substantial;

– the increase in trade turnover between Russia and China and avoiding the use in the calculation of the dollar will allow the yuan and the ruble to grow up a bit towards the "Americans";

– the opening of the Asian Bank and the formation of a reserve Asian currencies will allow the Chinese economy to grow more confident;

– inclusion of the yuan in the basket of international reserve currencies, is scheduled for late 2016, will also give the Chinese currency further impetus for growth. To buy the yuan at the moment in Russia is difficult and risky – future trends is the only trends, and not the fact that they come to life. However, part of the capital can be spent on the purchase of "Chinese" – it is possible that you will find yourself among the lucky ones who bought a cheap currency and sell it in 2-3 times more expensive.

A highly diversified currency portfolio should include 5 issuers:

dollar (the main pooled portfolio, the expense of growth of cost of currency investors trying to make) – about 1/2 of the capital;

– rubles (without them anywhere, they we still live) is about 1/4 of the capital;

Euro or the pound (in the hope growth and release of bearish trend) is about 1/8 of the capital;

According to their own preferences, you can adjust the proportions in either direction. The currency portfolio is designed for at least 1 year, and even better in 2-3 years.

Where can you purchase foreign currency?

The easiest way to go and change money in banks. If you want you can get your hands on real Bank notes or to open foreign currency deposits. Good decision – not just the currency, and multi-input. This service is offered any more or less big Bank. In this contribution it is possible to change the proportions of the currencies without fees and with minimal spread. Often open a multicurrency Deposit kind of the ruble / dollar / Euro at the rate of 2 to 4% per annum on the entire capital.

– when exchanging large sums it is necessary to order it in the Bank in advance;

– exchange operation can be continuous;

– it is necessary to confirm the identity.

– easy sharing – easy to change money, even for pensioners;

– it is possible to open a foreign currency Deposit and extra profit by investing.

We are talking about major financial brokers entering into international markets, including Moscow currency exchange. To acquire foreign currency through a broker, you must sign a contract with him for service, to replenish the Deposit to the required amount and to make arrangements to purchase foreign currency. This operation can be performed via telephone by voice or through a special terminal (remotely). The latter method uses objective popularity: a currency can be bought directly from the house current or desired market price (pending order) sell at the right time – all with minimal fees (compared to a phone call).

Of course, there are drawbacks:

– the Commission for each transaction in the area of 0,04%;

– Commission for withdrawal of funds in foreign currency (from 0.1% to 10% depending on the broker);

– the Deposit and withdrawal of funds is carried out for a long time (sometimes up to 7 days depending on the regulations).

But virtues are also missing:

– minimum spreads (compared to the Bank, rarely more than 10-15 items);

– the possibility of speculating on the price difference;

– the opportunity to purchase not only currencies but also stocks, bonds, futures, and other market instruments in rubles or dollars;

– purchased currency can be displayed on a multi-currency account in any Bank.

Another undoubted advantage of brokers – the ability to open an individual investment account and withdraw profit, tax-exempt. This is possible only for Russian tax residents. A list of the most trusted brokers according to the National Rating Agencies: – BrokerCreditService; – Finam; – Business; – the Discovery Broker; – the following entities; – ITinvest; – VTB24; – ATON; – Sberbank – Alfa-Direkt.

If you receive money to your eWallet, you should not neglect the opportunity to exchange currency within the payment system. Now such opportunity is given by:

– Rapid and several others.

Leader exchange is, of course, Webmoney. This system is the most secure and advanced in terms of technology. Possible withdrawal of dollars in the foreign exchange account or card. Enough to register in the system to enter payment data, to replenish the Bank account and to exchange on a special market. The exchange rate is set by supply and demand, and it can be different from the interbank rate or the rate on the Forex.

Sometimes it is more profitable to buy dollars to Webmoney than a Bank or broker.

– a high fee compared to the broker for Deposit and withdrawal of money (Webmoney – 0.8%, but on Payeer, for example, 3%); the rate may differ from the interbank not for the better;

– there is a risk of data theft by hackers of the purse.

– instant sharing of funds and quick withdrawal (usually within the hour);

courses can be pretty official;

– the withdrawal of money from on the map.

The main risk, of course, send money back. If you make a mistake with the payment details and accidentally sent the $ to someone else's wallet, cancel the translation can be very difficult. And when anonymous translation is impossible in principle.