Secrets bone China: how it's done

Bone China is considered the "Royal" is a fine, white, fresh, translucent... the Only plant in Russia that produces such dishes Imperial porcelain factory. How and what do this China, and why is it called bone? 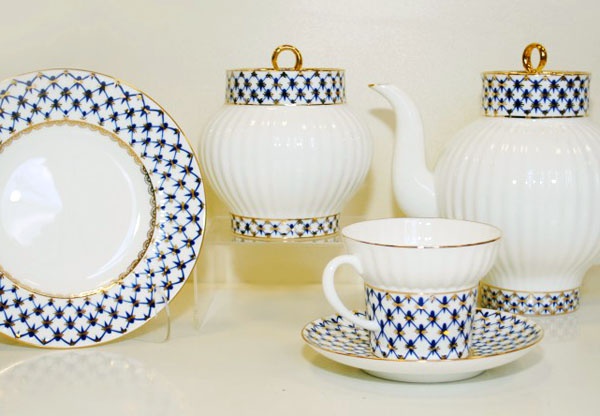 Porcelain "on the bones": a product of the deficit

The word "bone" in the title of the thinnest porcelain – not a metaphor, but a literal reference to the composition of raw materials. Conventional porcelain mass comprises kaolin – white clay and other clay materials, which gives upon firing a white color, as well as quartz and feldspar. In England in the middle of the XVIII century began to add to the strength and bone ash contained calcium phosphate and gave the dish such an incredible whiteness.

At the Imperial porcelain factory (in Soviet times it was called Lomonosov) bone China began in the sixties of the XX century. Paradoxically, the fact: the reason why the plant mastered the technology was not the ambitious desire to produce elite "Royal" dishes, and... the shortage of raw materials. 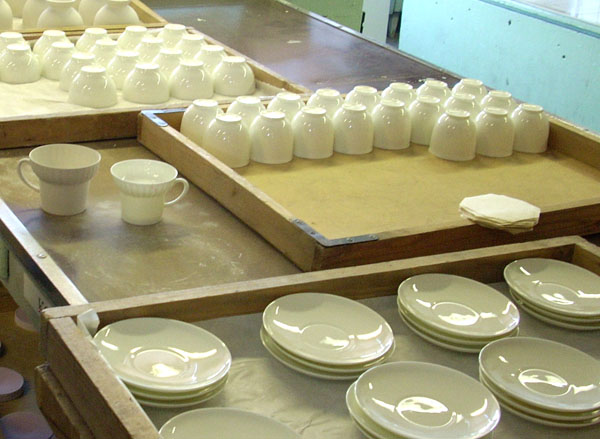 Since 1965, the factory was experiencing serious difficulties with the arrival of kaolin – white clay was widely used in the paper, perfume, and military industry. But there was a lot of waste bone. Therefore, the Director of the plant Alexander Sokolov has set production laboratory of the Lomonosov porcelain factory task: to develop the mass to bone China.

The composition of the raw material picked up by trial and error (foreign counterparts are not in a hurry to share a trade secret). The result was, for example, that the bird bones attached to the porcelain junk lilac tint.

As a result of staying on the Shin bone of cattle. Moreover, raw materials were not lacking. Button manufacture stamped from defatted bones buttons for pillow cases and military clothing – and the waste went to the porcelain factory, where he pergialis.

Mass for the manufacture of bone China only 55 % consisted of traditional kaolin, clay, feldspar and quartz, the rest is accounted for by bone ash.

In 1968 the plant was launched workshop for production of bone China. Unlike the English porcelain, which was thick enough at the factory decided to release thin-walled porcelain. And first even "overdone": first the cups were so thin and unrealistically light, that buyers began to complain of a feeling of "plastmassovaja". Therefore, the thickness of the ceramic body has decided to increase by 0.3 mm.

The birth of the "thin stuff" 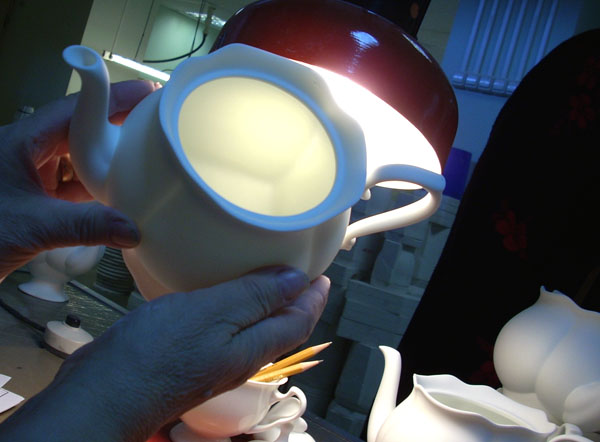 Cup of bone China, like many other porcelain items produced by casting. For this form, a plaster cast of the brim is filled with liquid porcelain mixture, reminiscent of sour cream the slurry. The plaster begins to "take" from the slip moisture – and the result on the inner walls of the mold gradually increases porcelain "crust". When she gets a proper thickness the excess slip is removed from the mold. Then the dried "crock" (so called unfired porcelain) begins to lag behind the walls of the mold and remove it.

In the manufacture of porcelain figurines items "dial thickness" for a long time – a few hours. With thin-walled cups, everything happens much faster – at the Imperial porcelain factory bone porcelain mixture is poured into molds for two minutes.

Handles for cups, teapots, sugar bowls are molded separately and then "glued" manually. As the glue is the same porcelain blend, only thicker. 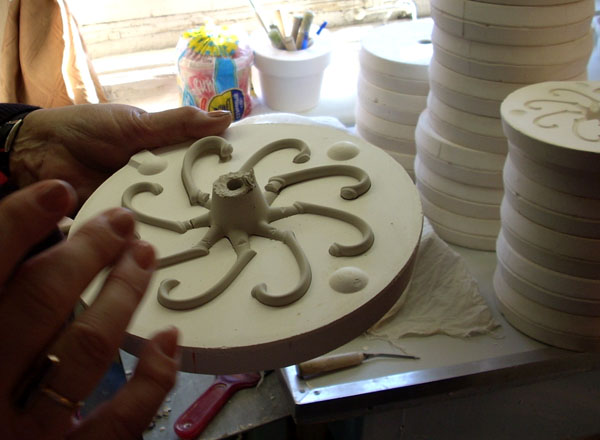 Flat products (plate, plates) are made by stamping. Porcelain prefabricated for these products do very thick, it resembles a plastic dough, rolled into "sausages". Cut piece of "sausages" is placed on a plaster mold, on top of him lowered a rotating forming roller (for each model roller). Surpluses are cut automatically, but the sanded edges and make the surface completely flat – the problem is the so-called "opravit", working only manually. 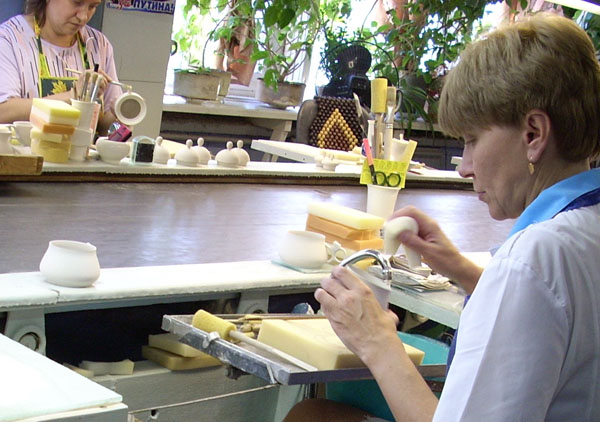 Bone China is fired twice. The temperature for the first firing very high – 1250 – 1280 degrees, which is much higher than that of conventional porcelain. At this temperature, the porcelain mixture is fully "baked" and acquires the necessary strength. In furnace cookware conducts 12 hours. And, by the way, is reduced in size by about 13%.

But until Shine. The Shine will appear after the porcelain is glazed. It consists of the same materials as the porcelain, but in a different percentage, in addition, it added a marble and dolomite. During firing the glaze melts, creating a brilliant glossy surface.

The glaze on bone China is applied with the spray – first with one and then with the other hand. And to be able to control the density and the thickness of the layer, the glaze is colored Magenta. Therefore, going into the oven for final roasting, cups and saucers have bright lilac color. At high temperatures the pigment fade and porcelain white. 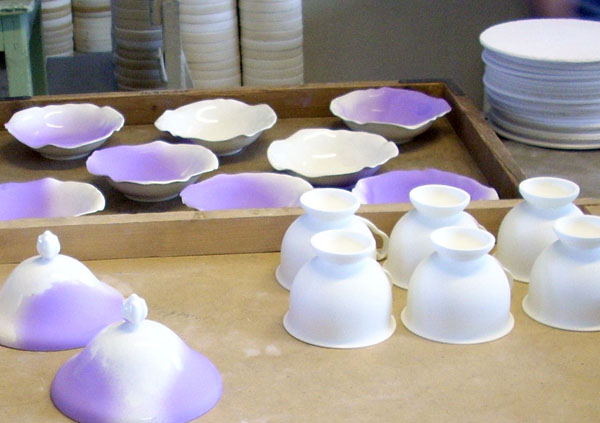 By the way, the firing temperature of bone China was the reason that the Lomonosov porcelain factory was able to maintain a monopoly on the production of Russian bone China.

Among the Soviet factories had been taken to keep the technology secret, so in the early 70-ies of the technology and design of the equipment was "donated" to Bulgaria, which then starts a new porcelain production. And in 1982, the technology was transferred to a ceramic plant in Kaunas, Lithuania. But the Russian factories do not dare to undertake the production of bone China. The only problem being that the porcelain is very sensitive to the firing temperature and the deviation from preset temperature settings literally 10 degrees makes the dishes in marriage. Thus, when it comes to temperatures over a thousand degrees, even the accuracy of measuring devices may exceed these same 10 degrees. And left the factory the only manufacturer of the "Royal porcelain" on the whole territory of the country.

How does the pattern

Pure white, neraspisannyy porcelain, which are not touched by the hand of the artist, the experts call "linen". But before you get on the shelves of branded stores, tableware should be decorated with a pattern.

Painting on porcelain is underglaze, overglaze, and the combined, combining both of these techniques. In such cases, the pattern is applied in two stages. An example of a combined painting can serve as the famous pattern "Cobalt net", which became a kind of "calling card" of the plant. 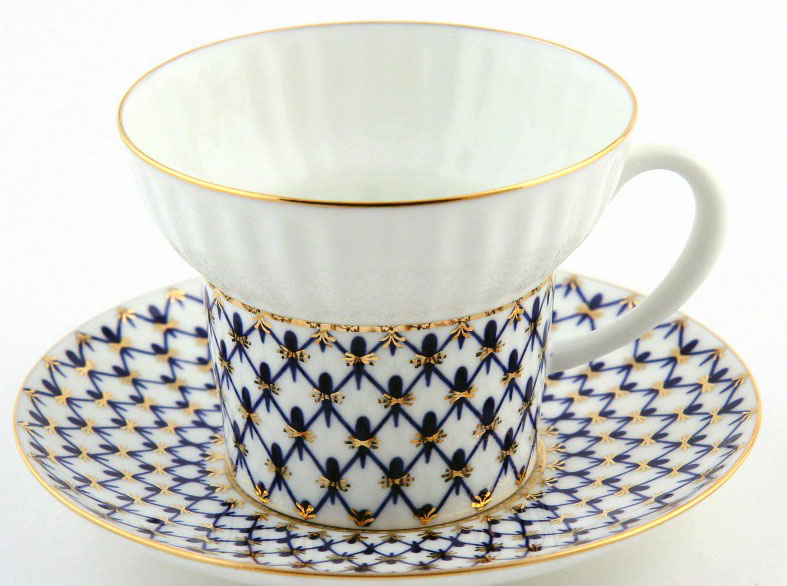 Cobalt pattern – blue lines – applied to the porcelain before the coating products glaze – the high-temperature firing, the decor is "sealed" in a transparent glaze tightly. Cobalt, before firing having faded dull black color, when heated, magically changed, and depending on the concentration pattern becomes pale blue or dark blue. By the way, all the colors used in the underglaze behave in the same way – their color, "manifest" during thermal impact and in the drawing they look pale shades of black, grey, brown. And artists who are working with multiple colors at once, have a hard time: they constantly have to "keep in mind" the future picture.

The figure is often applied by hand, but sometimes you can facilitate. At the Imperial porcelain factory, for example, has developed a special form for dishes that will be decorated "cobalt net": on the sides of the crock "drawn" subtle grooves – a kind of circuit that it is necessary to manually "trace" cobalt lines.

Cobalt pattern may popadat on the product and with decals – thin film, reminiscent of the decal on which is printed a cobalt pattern. 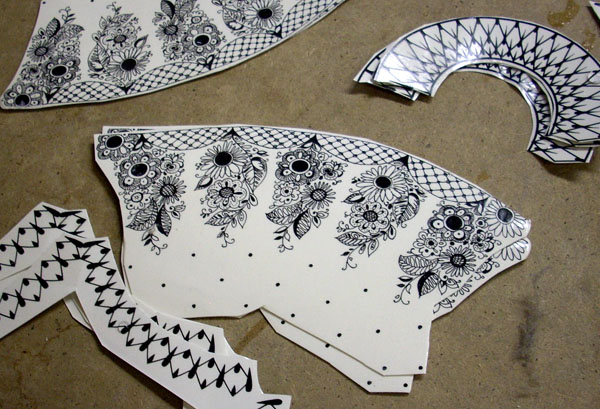 Form decal exactly matches the shape of dishes for each model is their own. Upon heating the film burned off, and the pattern imprinted in the surface of the product.

The application of underglaze drawing takes place after the articles have passed the first firing and before glazing applications. After the second firing of this cookware is sometimes looks very strange – it is already done the first part of the mural, and the second is still waiting in the wings. But you can imagine what's going to look like. 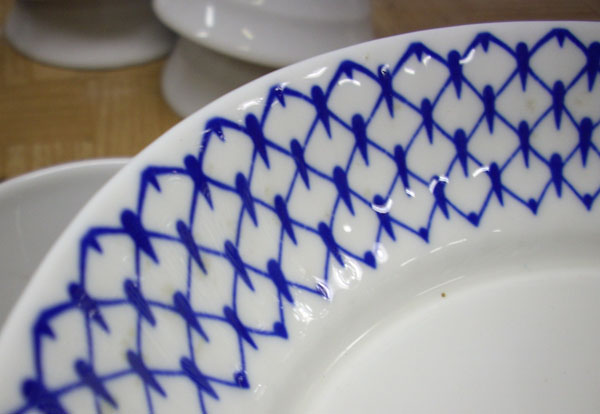 Painted gold – it is overglaze painting. Then the dishes will be one more firing, but at lower temperatures – only in order to secure the pattern. It allows to use when painting the precious metals, as well as a paint that can not stand "four-digit" temperatures. Gold stars on company pattern can applied manually by brush or with a miniature stamp.