In swampy areas and areas with high humidity and dim lighting it's hard not to notice a bright green mats of moss. In the forest area distributed by the moss sphagnum, which in Greek means "sponge". 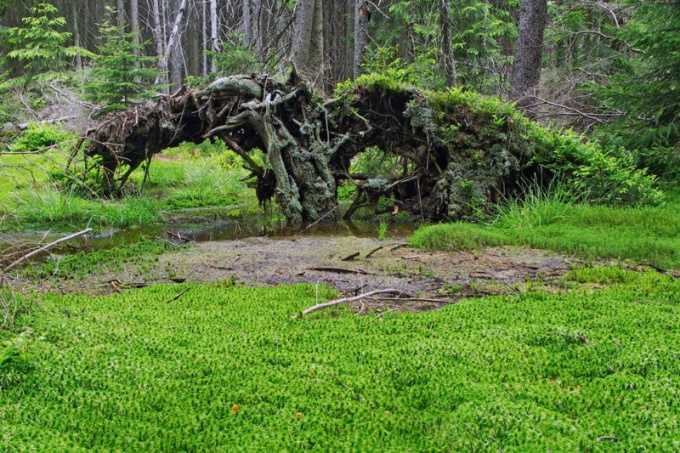 In the growth process of the plants had formed upright shoots not branched, gathering in dense turf-like cushions. Their height is small - generally no more than 5-6 inches. As such, the stem of sphagnum no, it is replaced filidei and cauligi. Between these elements of the plant have a slit that literally absorb water and salts essential moss for life.

Filidei consist of only one cell layer. The third element of sphagnum moss - rhizoids are the roots of the plants. These highly branched thin threads suck water from the soil. Which is typical for sphagnum, the rhizoids eventually cease to absorb the liquid and only play the role of a support for plants.

Like all vascular flora, sphagnum is the alternation of sexual generation (gametophyte) with asexual (sporophyte). Photosynthetic green plant is the gametophyte. He has male and female gametes that give rise to the sporophyte emerging from the zygote - fertilized egg.

Sporophytes - spore-bearing generation is not separated and remain with the gametophyte, feeding from him. In each cell a double set of chromosomes in the gametes one at a time. The sporophyte develops in the process of meiosis cell division. As a result, a dispute again becomes endowed with floors. It grows in single gametophyte.

Sphagnum has a number of useful properties that people have learned to use. In the 11th century, the moss began to be used in medicine as a dressing material, its hygroscopic properties it replaced wool. Sphagnum was used extensively on the battlefields in the first world war, as it is quickly absorbed the blood, pus and other liquids.

Even now, some pharmaceutical companies are producing tampons and napkins for dressings with the content of the sphagnum moss. The whole plant was discovered spagnol – penelopedevine compound having disinfectant, bactericidal and antifungal activity. Even the sphagnum has humic acid with the properties of natural antibiotic.

Popular among consumers and sphagnum insole that well help foot fungus. If you have an infectious nature lesions on the skin of the body, to help baths with infusion of sphagnum. Also, this moss is often used for filling mattresses and diapers. This is especially useful for critically ill bedridden patients, as it allows to deal with bedsores.

The sphagnum moss used in the growing for an easier and comfortable growing shoots and to protect plantings from frost.
Is the advice useful?
See also
Подписывайтесь на наш канал