How to prepare tasty asparagus

Tender and delicious asparagus only recently began off-season vegetable. Before that, for centuries, its shoots was associated with the arrival of spring. Sweet, juicy, flavorful asparagus was a long-awaited product, a delight for gourmets invented for her hundreds of recipes. In the modern diet, asparagus is not only a delicious treat but also part of a healthy diet: it contains few calories, no fat, lots of potassium, sodium and vitamins of group B. 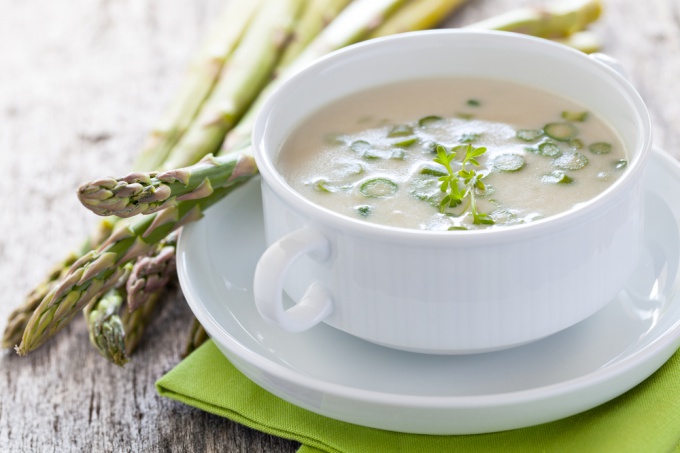 Asparagus come in three basic colors. The French are, as a rule, grow purple asparagus, the British and Americans prefer green, the Spaniards and the Dutch often sprinkled with escape the earth, causing the asparagus, not seeing sunlight, is pale white. Any asparagus has a pleasant spicy taste, the intensity of which varies corresponding to the brightness of the color. Very young, thin asparagus - it is commonly referred to as sprue - does not need any pre-treatment. Older plants somewhat "woody". You should bend each "spear" (the so-called asparagus), until it starts to break down, and then cut off the hard lower part in the place where it cracked.

Although some gourmets can eat asparagus raw, preferring white shoots all the way, if you expose the vegetables to heat treatment, its sweet, even a bit cloying scent of the manifest with the same intensity. Even just steamed the asparagus, sprinkle with good olive oil and seasoned with a pinch of salt, into a delicacy. Classic high cuisine is lightly roasted asparagus with a velvety hollandaise sauce.

The perfect utensils for cooking asparagus is special high and narrow pot with a submerged mesh basket. Plants immersed in it tops up so that the more rigid stalks were in salted boiling water, and tender buds prepared for a couple. If the home is not useful, but expensive equipment, it is possible to do ordinary wide, shallow pan. Pour in it water, salt and bring to a boil. Immerse the asparagus whole and cook for 1-2 minutes. Then drain the water and drizzle spears with olive oil, season with salt and pepper. Shake the pan so that all the shoots were covered with oil and spices, place them in a pre-heated wide pan. Cook for another 2-4 minutes, depending on the thickness of the shoots. Pour 25 grams of melted butter and shake again.

For making hollandaise sauce, you should heat up in a saucepan from non-reactive materials lemon juice and vinegar, not boiling. In the bowl of a food processor, lightly blend the yolks, and then lower the speed to slow and thin stream pour the hot juice mixture and vinegar. When the mass in the bowl is smooth, start adding the remaining melted butter, continuing to whisk on a slow speed. The sauce should become thick, smooth and glossy. Season with salt and pepper.

Try to cook the sauce along with the asparagus. If you doubt that you will be able to keep track of both components of the dish, start with the hollandaise sauce. Getting him ready, don't forget to cover the bowl with cling film to not gravy was a little dried out and its surface went "wrinkles".

Asparagus hollandaise sauce is often combined with the poached eggs. They are put on the finished shoots. And then pour all together in a buttery sauce and immediately served to the table.

In addition to Dutch, to asparagus suitable for many other sauces such as garlic Aioli, mayonnaise with lemon juice, lovers of fusion cuisine serves the plant with a mixture of soy sauce and sesame oil.

Elegant and delicious get asparagus cooked with bacon or ham. It is best to use slices of pancetta or prosciutto, which will take exactly as long as you have asparagus. Preheat the oven to 180 ° C, wrap each spear with a slice of bacon or ham, leaving the Bud uncovered, and bake on a covered baking paper baking sheet for 7-10 minutes. These shoots can be served on the dinner as a separate meal or for lunch, garnirovat them fish or meat.

No less exquisite and simple get a soup of asparagus. To prepare it you'll need about 400 grams of delicious vegetable, 500 ml vegetable or chicken stock, 1 onion, 2 tablespoons melted butter or olive oil and 4 tablespoons of cream fat content of not less than 20%.

This dish is also good for the fact that it can go and the chopped stalks of asparagus whose buds were already used in any other spectacular recipe. Shoots of the plants should be chopped, onions to chop thin half-rings. In a deep saucepan in hot oil saute the onion until transparent, then add the chopped asparagus and cook for 2 minutes. Pour the hot broth, bring to a boil, reduce heat and simmer for about 5-7 minutes. Season with salt and white pepper, preroute the soup and gently warm it, adding the cream and stirred.