Why the cat always sleeps

Domestic cats are very lovely creatures: they play and frolic, bringing their owners great joy. Typically, such active behavior is quickly tiring of the cat, whereby she is forced to make up for wasted power by using a longer sleep. Some owners are not a little scared when their pet sleeps all day, believing that their cat is sick with something. Fortunately, that is not always true! 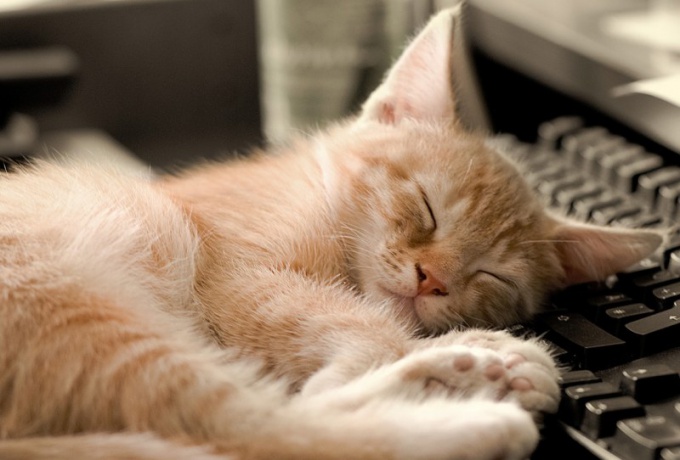 Related articles:
Instruction
1
Some owners of domestic cats was seriously concerned about the behavior of their Pets. We are talking about the excessive length of their sleep. Actually the concern should not be here, because cats are by nature the lion's share of their time in sleep. The period of surge of energy from felines constantly gives way to a long NAP or deep sleep. It may seem that the cat's not feeling well. If this is true, then there will be other symptoms pointing to health problems of your pet: a General sluggishness during the period of wakefulness, refusal to eat, dry nose, etc. In this case the animal must be seen by a veterinarian.
2
If the above symptoms are not observed, and the cat after you Wake up cheerful and energetic, eats well, plays host, and the reason for concern can not be. Long cat sleep is quite a normal reaction of the animal to the constant muscle loads experienced them during wakefulness. Besides the dream compensates for cats significant increase in their body temperature during one or another physical activity. As you know, passive recreation has a beneficial effect on the body, and cats is no exception! After all, sometimes in one day, the animal suffered a great deal much fear that the calm will help him only healthy and sound sleep. By the way, it is not recommended to Wake a cat, interrupting her rest.
3
Scientists argue that felines animals can rightly be called Champions of dreams. The fact that the duration of sleep is between 16 to 18 hours a day! It is curious that in the rest of the cat can as well take in a light slumber. According to scientists, this phenomenal ability to continuously dream is explained very simply: the cat is very active animals, metabolism in their body is very fast, forcing them to spend large amounts of energy, which, in turn, constantly have to fill with sleep. That's all the explanation.
4
Based on the foregoing, we can conclude that a permanent and long lasting cat sleep is quite understandable phenomenon inherent in these animals by nature. Don't Wake the cats during their active sleep, as it is not until the end of replenished energy can cause irritability of the animal and result in very aggressive behavior towards its owner. Scientists investigating behavioral nature of these animals, noticed that cats who are regularly not allowed to fill their hand with healthy sleep, you start to suffer from disorder of the nervous system. This, in turn, leads to some failures in their body. So do not be surprised at this: cats sleep as much as they need!
Is the advice useful?
See also
Присоединяйтесь к нам
New advices