What female hairstyle to make dreadlocks

Dreadlocks in the creation of hairstyles is almost the same as normal hair. You can gather it in a ponytail, braiding it, and so on. There are more complex hairstyle from dreadlocks. 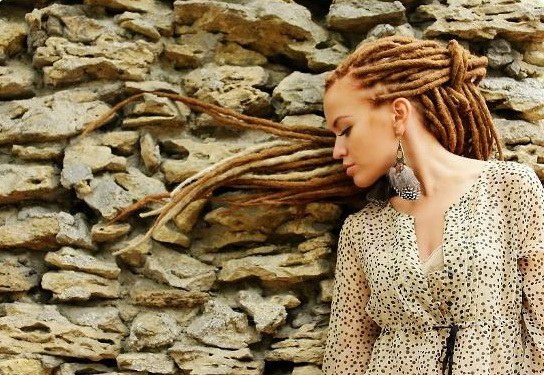 Dreadlocks produce a stunning impression. Literally they mean dreadful or terrible. In order to obtain dreadlocks, the master must roll, or matted hair in tangles. For reliability hair profusely namasivaya wax. Impossible to untwist dreads: they can only cut or shave my head bald. There are artificial dreadlocks made from synthetic materials. They can be fastened to your own hair.

If your dreads look very voluminous, collect them in the tail. For fixing use a sturdy and thick rubber. To collect the tail can be anywhere: on top, behind the head or neck. If the part of hair you want left free to collect in the tail, only the front and temporal dreads, and let the rear just hang. Put on your sunglasses, and your look will be super stylish.

You can not use the gum, but instead wrap hair with one dragoi and fasten invisible. It looks very original.

If you have a noisy party, dismiss dreadlocks. And hair put on a cloth bandage. It can be flowers, crystals, beads and other decorative elements. A headband will not do, as it will not keep voluminous dreadlocks.

If your dreads are long enough, make a ponytail. And then collect them in a lump. Fix it with Bobby pins is unlikely to succeed. To bump is not broke, put on top of a large rubber band. A bundle of dreadlocks should get mega volume. If you go to the party, decorate the cone in any decorative elements.

Hairstyles of dreadlocks with braids items at first difficult to perform. But over time you will get better and better. Due to the fact that dreads are very voluminous, are unlikely to braid one braid at once. It is better to use dreads as single strands for braids, and not to combine them.

If you want to get very voluminous braid, then combine a few dreadlocks in one strand and do the weaving. Always focus on the thickness of the dreadlocks, as it is different.

So, take two dreads at the front and sides and braid a normal braid. Let the rest of the dreadlocks hanging down the back. If dreads are not long, braids can get no more than 3-5 units.

Next haircut will make you look like a alien. First make absolutely everyone dreads in cornrows. They should be the same volume. And then twist each braid into a bun and secure it with small elastic. You may be able to use hairpins and invisible. So, all over the head you will have lots of KOs.

Weave braid of dreadlocks, located at the face. Then wrap the oblique head like a headband. The tip of the spit lock from the opposite ear.

Very nice braids of dreadlocks, which are woven in satin ribbon. Just tie a ribbon to the base of the dred. Use it as the third strand in a braid. Braid several braids with ribbons of the same color, and the remaining dreads leave her. Tape, rubber bands and other jewelry pick up so that they harmonize with your outfit.
Is the advice useful?
See also
Подписывайтесь на наш канал