Acacia is a legume that is found in a variety of countries, including in Russia. Thus, despite all their diversity, most species of acacia are characterized by a similar flowering period. 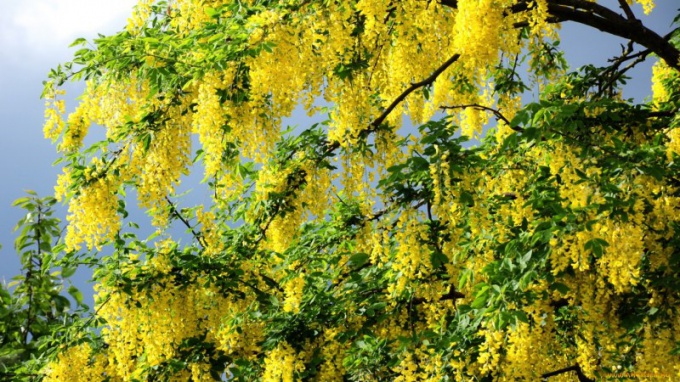 Acacia is a numerous genus of plants, which includes more than 800 species. In addition, it is often referred two other species - acacia (Karagan) and acacia (Robinia), which in fact belong to a different genus. However, these species and the true Acacias belong to the legume family, and in addition, combined with other characteristics, for example, features of flowering.

Due to the variety of types belonging to the category of Acacias, in the world there are a huge number of options flowers of this plant. They are single or United in various types of inflorescences in the form of brushes, brooms, or other structures. The flowers or inflorescences may be located on different parts of the tree: at the end of the branches, in leaf rosettes or other parts.

The most common on the territory of Russia are two kinds of acacia. The first of them - the white acacia, the flowers of which having a corresponding color, is commonly collected in large brush that under the weight of it slope downwards. As a rule, during flowering the tree forms a very large number of flowers, which the Bush seems more white than green. In this regard, white acacia enjoys considerable popularity as a decorative culture, used to decorate parks and gardens. However, this plant species is characterized by talyubittu, so it can be found mainly in the southern parts of the country.

Black locust usually blooms in late may-early June, however, as has been proved by researchers of botany, the specific timing of the flowering period depend on weather conditions during the previous period of the year: the warmer the spring, the earlier start of flowering. As a rule, the duration of flowering is from 2 to 3 weeks then the flowers fall, and the fruit begin to form in the form of pods, which ripen in October.

Yellow acacia has painted in the appropriate color the flowers usually in racemes of 2-5 units. Each flower form resembles a butterfly, and they appear on the trees at the same time, that of the acacia at the end of may or early June. As a rule, the flowering period of the plant is about two weeks, but in regions with a cooler climate it may take up to three weeks.

Both of these species of acacia as well, and the plants belonging to this genus acacia, under normal climatic conditions commonly begin to bloom in the second year of life. Most of the plants of this genus, regardless of the growing region is typical for such a period of flowering in late may or early June.
Is the advice useful?
Присоединяйтесь к нам
New advices