How to play Minecraft on LAN

More or less experienced players in Minecraft is usually rather quickly get bored of single player variant of this game. They often use it only to test any new map or mod (and some without this cost). The rest prefer the multiplayer resources - for example, servers. However, what if you fight in your favorite game with a few buddies the desire is there, but the server for this to look not want? 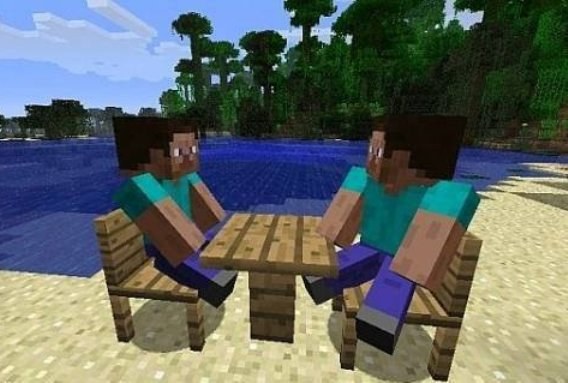 Is the organization local battle in Minecraft in several ways. In any case, it will require the right amount of computers or laptops - by the number of friends who have decided to participate in such endeavor. Then everything depends on the choice of a particular method of combining these devices to the network. If there are enough network cables, able to connect the computers physically, is not a sin to use them.

First you need to connect cables all computers to ensure that the selected key. Then it will need to run Minecraft as usual. When starting the game, you have to exit it by pressing Esc and open the menu and select open gameplay on LAN. There is need to make regular settings that are made for the gaming world.

After this it is necessary to open such a world to buddies who will play with the owner the host computer on a local network. This is done with the corresponding button in the menu. As a result, upon returning to the game, the screen will display the IP address of the port the Local server is running...") that we must be sure to write it down.

Next, you will need to find out the IP of the host computer. One of the simplest ways to implement such intent - send the appropriate request to one of the Internet search engines. The IP is registered there in the response as IPv4. It is necessary to rewrite, and then a colon (without any spaces) to specify the previously procured the address of the port.

The resulting combination of numbers is for the friends whose computers are connected to the local network. They will need to run "Minecraft", then choose multiplayer and enter in the correct place the symbols in the order that the owner of the server" they said.

However, if there is no network cable, to organize a local competition in Minecraft is also possible. For a group of computers into a virtual LAN, there is a special software. Most famous in this respect, the Hamachi, compatible with almost all versions of the game and with modern computers with Windows XP and above.

"Hamachi" is free and you can download it from official website manufacturer. Install it in each of the computers a makeshift local area network. Then on of them is selected as the server, it is necessary to make the following changes.

You must open Hamachi and click it the start button. Next you need to click on the menu that appears by the inscription, which triggers the generation of a new network. After this, you will need to enter the name of the future playgrounds, the password for that and confirm it. These data should inform all participants of the future network.

Further, the owner of the server computer runs Minecraft and similarly, as in the case with the physical LAN connection (via cable), finds numeric identifier of the port on which to run the game. However, nothing happens if you don't define the IP address necessary for gameplay.

This will help the owners of the other computers in the local network. They must log in to Hamachi from their devices, choose the previously created play area by entering its name and password, and transfer the IPv4 (it is marked near the launch program button until the icon). After the colon, it is required to make informed clear ID slot port and copy it to any text file, the resulting combination.

Now all gamers will need to run on their computers Minecraft and choose where in the menu direct connection to the network. This will open a special window in which it will be necessary to insert the symbol combination that was saved in a text document. All members of the local network remains only to enjoy the game.
Is the advice useful?
See also
Подписывайтесь на наш канал