The salmon family is a very valuable fish species. In the consumer market, this fish is expensive, meat is the basis for the preparation of many delicious dishes, very popular among gourmets enjoys red caviar. 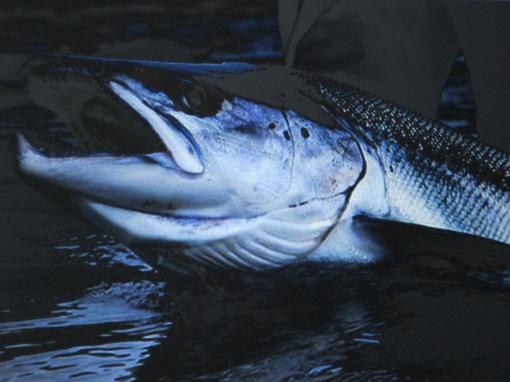 Salmon and trout are like the collective names of fishes of the salmon family. In fact, the list of members is quite extensive: salmon are pink salmon, grayling, sockeye, omul, salmon, chum salmon, trout, whitefish, and some others. Habitats salmon are the Atlantic and Pacific oceans, the waters of the middle and Northern latitudes, a major spawning ground is located on the Kamchatka Peninsula. These fish species live in the seas, and go to spawn in fresh water, so they belong to freshwater walk. There are breeds, including fish salmon and some trout species that are bred artificially.

The largest members of the salmon family are salmon, trout, Chinook salmon, whose weight can reach up to seventy pounds. Detachment white is characterized by small size.

Structure of body very similar to salmon clupeiformes, so long enough of their representatives were considered relatives of the herring. But well after reviewing all the features leaseoperating, scientists have identified them in a separate family.

Covered with round scales elongated body of the fish is squeezed at the sides, has extending along the lateral line, and the majority of these breeds have nakrap, i.e. the spots on the body. Characteristic species of this family is the presence of two fins on the back: one of them has a large number of rays and the second bezrukovoj, or fat. Different salmon and some other features: for example, they have a kind of connection to the swim bladder with the esophagus, around the mouth are the premaxillary and maxillary bones, eyes are covered with transparent eyelids.

During spawning fish are transformed: lost silver, and the color becomes brightness; appear on the body black and red spots; the males of certain species appear humps (called "salmon" due to this); be more teeth and changing the bending jaws.

The period of spawning and offspring

Among the salmon family sometimes there are centenarians, but often the spawning period becomes the death of a large number of individuals going into fresh water rivers, especially Pacific fish: pink salmon, chum salmon, sockeye salmon. The record for survival after spawning was observed in Atlantic salmon: five times she could produce offspring.

Fingerlings (fish fry) of pink salmon first held in the coastal waters, then leave them; fry of chum salmon around the coast for a long time, almost immediately beginning his marine life; the Chinook salmon offspring is long enough in the rivers (especially the males); the younger generation of sockeye salmon may go to sea even after 2-3 years after the appearance of permanently remaining in fresh water.

The types of salmon

Among the Pacific salmon family, the most numerous representative is salmon, the maximum length of which is up to 76 cm and a weight of about 5.5 kg.

In the far Eastern seas prevalent chum salmon, the average size of a running fish is approximately 60-65 cm and a weight of about 3 kg, but there are larger specimens (up to 1 m length).

The largest and most valuable representative of the salmon family is the Chinook salmon that inhabit the coasts of America and on the Kamchatka Peninsula. The average length of this fish 90 cm, and a fairly large specimens weighing up to 50 kg.

Has long been known for excellent taste of meat Chinook salmon: among Americans this fish got the name "king salmon" and the Japanese call it "Prince salmon".

Sockeye salmon prefers cold water and lives mainly off the coast of Alaska. In water areas of our country it is found in the rivers of the Kamchatka Peninsula, Kuril and commander Islands. Delicious meat sockeye salmon red, body length of the fish can reach 80 cm and a weight of 2-4 kg., the Canadians, the Americans and the Japanese bred the sockeye sport fishing.

Valuable meat is delicious and loved by people a delicacy, caviar, has made the family popular salmon species. Large scale illegal mining reaches the fish, resulting in a separate breed listed in the Red book and require constant protection.
Is the advice useful?
See also
Подписывайтесь на наш канал