How to distinguish a male pink salmon

Pink salmon is the most numerous and the smallest salmon. The meat is pink , though a little inferior to most Pacific salmon, but still is very tasty and nutritious product. In stores pink salmon you can buy in the frozen and chilled and smoked, and salted. Males of pink salmon fatter females, but females, you can find delicious eggs. So how to distinguish them when buying? 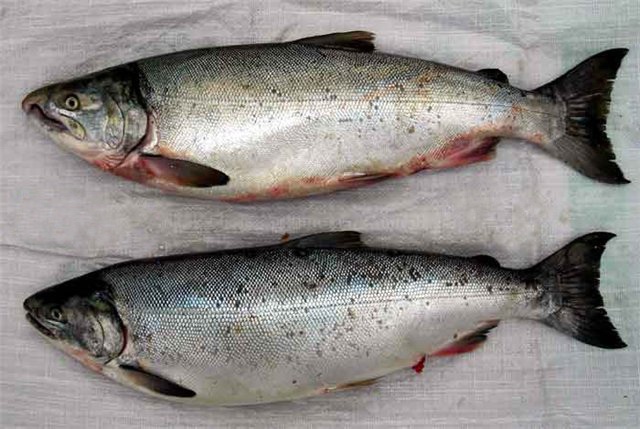 Related articles:
Instruction
1
The female pink salmon size is usually less than the male. Some male salmon can reach 4-4,5 kg in weight, whereas the average weight of females 1.5–2 kg. But in fact, it does not figure as the size of the fish depends on its habitat; in some regions and the size of the male may be just 350-500 g.
2
Meat females usually drier than the meat of a male. But this symptom can be determined only after trying meat fish. Foreign species, especially if the fish is frozen, say, fat it meat or not, it is impossible.
3
Accurately distinguish the store of the male salmon from a female can be in their coloring. If you compare, you can see that the female, as not infrequently happens in nature, has a more nondescript appearance. She has more smooth lines and color transitions, in General it looks gray and rustic, while the male on the contrary has a more bright and rough.
4
Another reliable way to distinguish the female from the male pink salmon is the comparison of their heads, but rather the shape of their heads. From the male the head is more elongated and sharp. Enough jaw much elongated, and as if bent up. Externally, the face of the male has a rather predatory look. The head of females slightly smaller, more rounded and with a much more blunt nose.
5
Also the female has a pink heel fin has a small elongation, whereas in the male this fin is completely flat which he is slightly smaller in size.
6
If the male pink salmon managed to get to spawn, then it's easily possible to determine on the back. Besides the fact that both males and females Lescaut and become brown and green and white colors, the males are, in addition, when they come into fresh water, become a different body shape. On their back there is a kind of characteristic hump (hence the name itself and fish (salmon). The back of the females is smooth and fairly straight.
Is the advice useful?
See also
Подписывайтесь на наш канал