Originally banderlog called a fictional monkey-folk from the works of English writer Rudyard Kipling's "the jungle Book". Currently, however, this notion already includes a number of generally informal definitions. 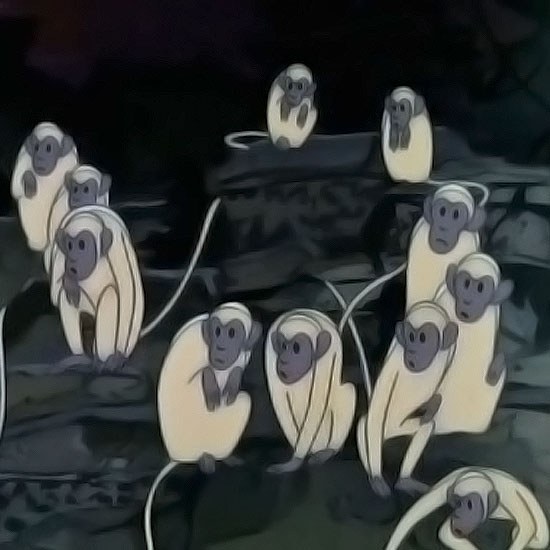 Related articles:
The word "Bandar-log" first appeared in "the jungle Book" by Rudyard Kipling. Translated from Hindi it means "monkey people." In the Russian editions often see the word "banderlog" in the designation of a separately taken monkey (or "banderlog" when talking about the whole pack), so the domestic reader the option of writing and is more common.

The explanation of the original definition

Banderlog from the works of English writer differ fundamentally from the other characters in "the jungle Book". Monkey people do not recognize the Great Law of the Jungle, they also have and its law that allows them to put ourselves in principle outside of any laws.

However, they're always going to make their own laws and customs, to choose their leader, but never carried out, because their memory is not enough even until the next day. To justify this monkey wrote saying: "what the Bandar-log think now the jungle think later".

They have their own language – monkeys just borrow and repeat what one heard from the other animals. Monkey people are not able to create. Because they own nothing, except follow. However, they also soon get bored.

Despite the seeming amusing and limitations of these animals, they are very dangerous. Dangerous that can for fun, without any sense and need to throw a stone, stick, pounce crowd or even killed. To kill just so aimlessly out of boredom. For banderlogov have no conscious goals and plans; when the head of one of the monkeys had an idea that she immediately, without hesitation, followed by the rest of the members of the pack.

Thanks to the many beloved childhood cartoons (Soviet "Mowgli", "jungle Book" and "the jungle Book-2"), but also because of the characteristic and memorable features of the life of the monkey people, the word "coup" to date, found some more specific values.

In army parlance banderlog called the military personnel of divisions of special troops GRU. This situation is explained by the fact that the training of officers of special units includes in-depth study of foreign languages, and the basics of acrobatics.

In prison slang "banderlog" called the prisoner who refuses to communicate with other prisoners, most of the time spends alone in the chamber or sleeping. Usually, such people go to prison on their own misunderstanding or coincidence.

Among young people in some regions of our country, "banderlog" is sometimes referred to as a typical representative of the "gray mass", or the lazy man who does not know what he wants.

Because of the colorful scenes of hypnosis monkey snake Kaa in the book and cartoon, with the concept of "banderlog" sometimes referred to as easy to others ' influence people.

Some of the information publication, and politicized Internet users name is banderlog of Ukrainian nationalists (usually followers of Stepan Bandera, or anti-Russian supporters of the euromaidan). Such use of words is due to the consonance between the two concepts ("banderlog" and "banderovets"), and from the debilitating sense of the original definition.

The new value of the word "banderlog" acquired in 2011 by Vladimir Putin, quoted during the live broadcast of the phrase boa Kaa "Come to me, banderlog" against opposition-minded citizens who, in the opinion of Vladimir Putin, succumbed to the influence of foreign enemies of Russia. The word instantly became one of the most discussed in the Russian media and blogosphere events. Since then and to this day it is used in political circles when referring to the Pro-Western associations of citizens, or even against the opponents of unfriendly political parties.
Is the advice useful?
See also
Присоединяйтесь к нам
New advices