For some reason the computer itself is turned off 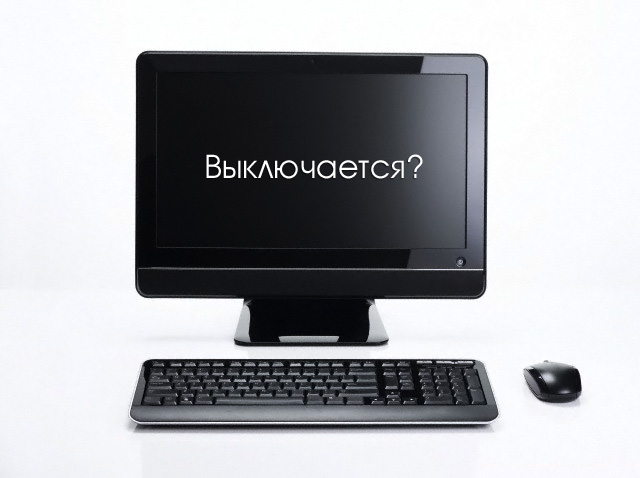 This is one of the most popular reasons why the computer is turned off. To be more precise, the dust covered on the cooler and sieve the radiator. The dust strongly impedes the proper heat exchange, the result and the result is overheating of the processor, which in the end gives the signal to turn off the computer. Very often it happens during some games, because at this time all components operate at maximum level and as a result, they require cooling. You need to remove the cooler, clean it and clean the dust from the grille.

Sometimes this reason is "legacy" thermopaste, which is located between the radiator and the CPU. Thermal paste is needed as a conductor of cold temperatures and heat. To resolve this just remove the cooler and the grille, and then apply a thin layer of paste on the processor.

Poor circulation inside the system unit

To avoid such overheating and switching off will help air circulation. You need to install some more coolers, and change the coolers on the PSU and the CPU. You should also not keep the computer in closed spaces, it is not necessary to prop up his table, wall or printer.

A large number of programs

This is another interesting reason why the computer can be turned off – running too many programs. Especially strongly it affects older computers. It should efficiently reduce the number of processes using the task Manager, but it must be done very carefully.

Faulty power supply is one of the most popular reasons involuntary shutdown of the computer. Often power supplies come in unsuitability due to low quality, of differences in the voltage or abrupt shutdown of the PC. Power supply units require replacement every 3 years of operation. Among other things, the main reason for the failure may be the dust.

The problem with motherboard or RAM

Turn off computer when using software or computer games can say that from failed RAM or motherboard. In this case, to solve problems independently is unlikely to succeed, it is better to consult specialists.

The computer may shut off due to a breakdown in the cable that connects the mains and the computer. Can also be a problem with the network filter. It is important to check all the wires with a special tool or using a trivial replacement. Also it is worth checking the socket just in case.

This is the last possible cause the computer is off. Indeed, there are viruses that can spontaneously shut down the computer. To remove viruses, use special programs antivirus.