How to roast eggplant and peppers in the oven

The benefits of vegetables today much is known. Rich in minerals and vitamins they are extremely important for healing and strengthening the human body. Eggplant and bell peppers – not the exception. One can prepare many delicious dishes. Peppers and eggplant are marinated, boiled, stewed, fried and baked in the oven. 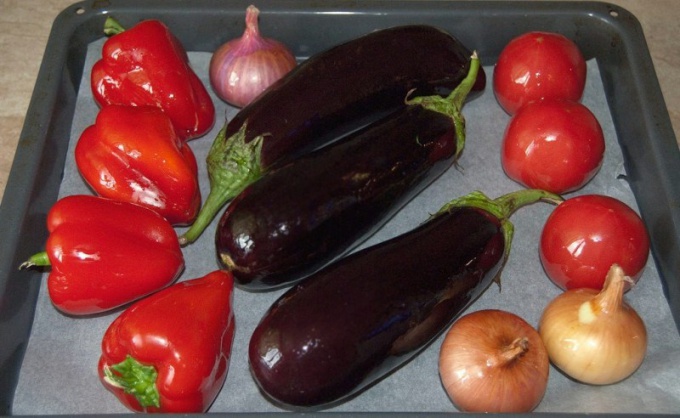 Related articles:
You will need
Instruction
1
Caviar of eggplant and peppers

Carefully wash the eggplants, bell peppers and tomatoes. Drain them on a paper towel. The eggplant cut off the "tails" of the peppers, remove the stalk with the seeds. Onions clean. Brush eggplant and bell peppers with vegetable oil and make punctures along the fruit with a fork. Then place on a baking sheet and place the eggplant with the peppers for 20 minutes in a preheated oven bake at 180 ° C. Finely chop the onions and chop the greens. Tomatoes scald with boiling water and immediately immerse in cold water, then remove from fruit peel. Baked eggplant and peppers also remove the skins, then put in a bowl, cover with foil and leave for half an hour to infuse. Then all the vegetables finely chop, if necessary, drain excess liquid. Connect all of the components of caviar: eggplant, peppers, tomatoes and onions. Sprinkle all of the crushed garlic and chopped herbs. Season to taste with pepper, salt and vegetable oil.
2
Hot appetizer eggplant and peppers

Carefully wash the vegetables (eggplant, Bulgarian pepper, tomatoes) and dry. After this, removing the "tails", cut eggplants lengthwise into 4 pieces and open like a fan. Then add salt, soak for 10 minutes and press. This is done to eggplant the bitterness left. Tomatoes cut into slices, and bell peppers after removing the seeds, slice thin rings. Grate cheese. Grease a baking sheet with vegetable oil, put in it open the eggplant and brush them with sour cream. On each plate put slices of tomatoes and rings of peppers, salt, pepper and sprinkle with grated cheese. Preheat the oven to 180 ° C and bake the eggplant with pepper for half an hour. To the table serve hot, sprinkled with chopped greens.
3
Eggplant under a fur coat

Wash and clean the eggplants, cut them lengthwise in half and sprinkle with mixture of salt and sugar. Leave for 20 minutes, then rinse, dry cloth and fry in vegetable oil until tender. Washed and drained bell pepper cut into strips, removing the stalk with the seeds. Slice the onion half-rings, garlic finely chop. Sauté prepared vegetables in the remaining oil for 5 minutes. Add diced tomatoes, salt, put the oregano and simmer for 10-15 minutes on low heat. Then put the eggplant on a small baking sheet or in a refractory form, they are stewed vegetables, sprinkle with grated cheese and bake in the oven until just brown the cheese. Ready eggplant before serving pour the sauce. For its preparation cut the peeled onion half rings, tomatoes – diced. Fry the vegetables in vegetable oil. Add the Bay leaf, pour in the wine and evaporate the liquid by about a third. Then wipe all through a sieve.
Useful advice
If desired in a caviar of eggplant and peppers, you can add a couple of tablespoons of crushed walnut kernels.
Is the advice useful?
Присоединяйтесь к нам
New advices